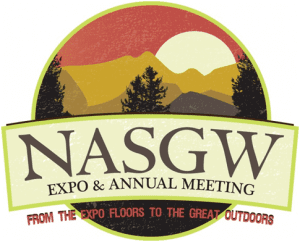 Naperville, IL (October 15, 2014) – Over 450 members met last night to kick off the 2014 41st Annual Meeting and Expo of the National Association of Sporting Goods Wholesalers (NASGW) held at the Marriott Hotel and the Statehouse Convention Center in Little Rock, Arkansas. Kent Williams, NASGW Chairman, welcomed the members and set the stage for three days of productive meetings as distributors, manufacturers, manufacturer’s reps and media prepare for the coming sales year.

Each year at this event, NASGW Awards the top optics, accessory, ammunition and firearms manufacturers who best demonstrate a commitment to the two-step distribution process, and who provide outstanding value and service. Wholesaler members evaluate the performance of manufacturers on four key criteria; distribution policy, marketing, sales and promotion; logistics and operations and NASGW and industry support. This comprehensive assessment of manufacturer performance has been designed to provide a more balanced appraisal that truly recognizes the best of the best according to NASGW distributor members.

This year’s Leadership Award recipients are:

2014 Firearms Manufacturer of the Year: Sturm, Ruger and Company, Inc.

Awards of excellence were also announced during this year’s leadership program. Winners in this category include:

“These companies represent quality products and services to our members for many years and have been strong supporters of wholesaler distribution,” said Williams.

2014 Innovator of the Year Announced

product, service or strategy that excels above the competition.