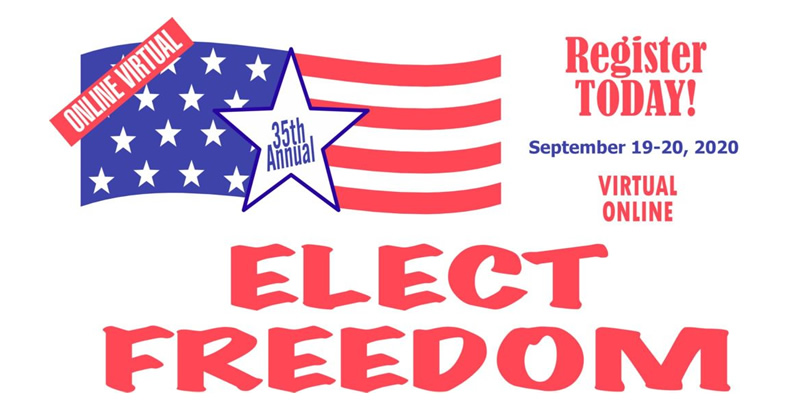 BELLEVUE, WA – (ArmsVault) – For the first time in its 35-year history, the annual Gun Rights Policy Conference will be a virtual event held online Sept. 19-20, hosted by the Second Amendment Foundation and Citizens Committee for the Right to Keep and Bear Arms.

This year’s conference theme is “Elect Freedom.” With the crucial 2020 presidential and congressional elections less than two months away, this year’s event has added importance for gun rights activists across the country. To register, go to www.saf.org/grpc/. You will receive information to join the event, which will be presented on several different platforms.

The conference agenda includes 32 panel discussions covering such subjects as federal and state legislative affairs, grassroots activism, suicide prevention, legal actions in defense of the Second Amendment, media and corporate attacks on the right to keep and bear arms, women’s issues, advancing the run rights message, and much more. There will also be a panel memorial honoring the late Joe Tartaro, SAF president and longtime executive editor of TheGunMag.com.

“Despite the problems relating to COVID-19,” SAF founder and Executive Vice President Alan Gottlieb acknowledged, “we’re really excited about this year’s event, and because it is online, we are going to reach a huge audience. The importance of that cannot be over-estimated.

“We’ve got a lineup of presentations that will educate, inform and even entertain our GRPC audience,” he added. “We will also have some special VIP appearances.”

“Since the first GRPC was held in Seattle in 1986,” Gottlieb noted, “the event has evolved from 20 speakers and 70 attendees to more than 90 speakers and 1,100 attendees in 2019. The GRPC has become a ‘must attend’ event for gun rights advocates and grassroots activists across the country. This year we anticipate having nearly 120 gun rights speakers.”

And because the event is entirely online, gun rights activists can attend from the comfort of their own home.

“This will be an awesome event,” Gottlieb predicted, “and gun owners from coast to coast can virtually attend.”