Fredericksburg, Texas – (ArmsVault) – Cimarron Firearms, recognized as the leader in quality and authenticity in Old West replica firearms, is proud to announce the 1876 Centennial “Tom Horn” lever-action rifle inspired by the movie of the same name and starring the legendary, Steve McQueen, is featured in the March issue of Firearms News®.

The article is written by Will Dabbs, MD, veteran, medical doctor, entrepreneur, and author, with a cover photo and article photography by Mike Anschuetz, a 10-page feature, plus an exclusive interview with actor and friend, Mel Novak. 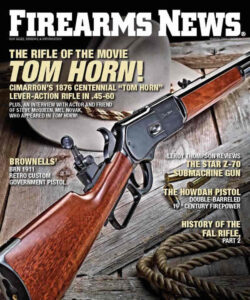 The Cimarron Centennial “Tom Horn” rifle is so named for its introduction during the 100th anniversary of the Declaration of Independence from England and featured at the Philadelphia Centennial Exposition. Built on an enlarged 1873 Winchester, the 1876 Centennial was capable of handling stronger loads than the previous version, which made it a fast favorite of buffalo hunters, frontiersmen, and lawmen. Cimarron’s Tom Horn 1876 rifle is chambered in .45-60, the same caliber the “movie” Tom Horn carried. The rifle’s blued frame features the infamous “stock detective’s” signature engraved on the side plate. A 28-inch octagon barrel in standard blue with the Cimarron designed Tom Horn sight and nicely figured walnut stock and forearm complete this finely replicated rifle. MSRP $1,846.25.

Thomas Horn Jr. (Nov. 21, 1860 – Nov. 20, 1903) was the real-life stuff of Old West legends. Brought up with 12 siblings on a farm in Missouri, life was hard, but at sixteen Horn went west and became a US Cavalry scout during the Apache Wars and was present when Geronimo was finally captured. Horn had a variety of jobs from ranching, prospecting, and even participating in rodeos before he was hired by several cattle companies to fight cattle rustling. He served as a deputy sheriff under William Owen “Buckeye” O’Neill, Commodore Perry Owens and Glenn Reynolds. While working as a deputy sheriff, Horn came to the attention of the Pinkerton National Detective Agency and began working for them in the Rocky Mountain areas of Colorado and Wyoming. Despite all his abilities as a tracker and lawman, Horn was implicated in a murder in 1901 and despite an effort to free him, Horn was executed by hanging in 1903. While in prison awaiting execution, he penned his autobiography, “Life of Tom Horn, Government Scout and Interpreter, Written by Himself.”

Tom Horn’s life and death have been featured in multiple movies and TV dramas, but the best, by many accounts, is the 1980 western film directed by William Wiard and staring a similar restless soul, the actor Steve McQueen, known as the “King of Cool.” The movie Tom Horn, was one of his last films before he succumbed to cancer at age 50 in 1980.

Read the Firearms News article at www.firearmsnews.com or buy a copy at your nearest newsstand.
For more information on Cimarron Firearms and accessories, visit www.cimarron-firearms.com.