For the last eight years running, Comp-Tac® has proven the most popular competition holster brand among IDPA championship shooters. This year, the company also garnered the top spot for everyday carry holster brand, EDC magazine pouches, the second spot for magazine pouch company, the fourth spot for belt manufacturer and the second spot for concealment garment manufacturer through Armadillo Concealment, a division of Comp-Tac. 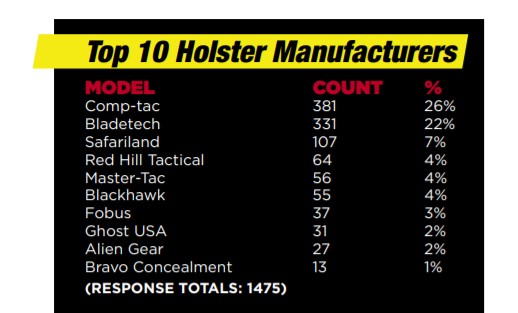 The IDPA membership, which numbers more than 22,000, has put Comp-Tac in the top spot 12 times in the annual survey since 2004. Comp-Tac was also the most popular EDC holster six times, which accounts for every time the EDC category was surveyed. The brand has never been surveyed lower than the second spot for competition holster since 2004.

“We’re always immensely grateful for our persistent popularity within the shooting community,” said Randi Rogers, Comp-Tac director of brand management. “Many of us at Comp-Tac are shooters making gear for shooters. Our roots lay in the competitive and concealed carry communities, and we’re proud to be recognized and receive their continued support,” added Rogers, who is a seven-time IDPA national champion, eight-time IDPA indoor national champion and two-time IDPA back-up gun national champion.

Comp-Tac started in 2001 to address the lackluster offerings of concealable holsters on the market. Their holsters soon gained popularity in the concealed carry and competition holster markets, while also becoming a trusted source for off-duty LE and undercover military members overseas. Comp-Tac joined the High Speed Gear® family in mid 2018 to compliment the brand’s already diverse offerings.

Comp-Tac Victory Gear® is devoted to designing and manufacturing the highest quality concealed carry, competition, tactical holsters and related accessories on the market. Comp-Tac® products offer options that make it easy and comfortable to carry a firearm for all our customers: law enforcement, military, shooting sports enthusiasts and responsibly armed citizens. We build with the customer in mind, ensuring speed of manufacturing, quality of product, competitive pricing and superior customer service to support the desire to take responsibility for personal safety, security and recreational firearm use. https://comp-tac.com

High Speed Gear® is dedicated to building the best 100% American-made, Battle-Proven Tactical Gear™. Our products are designed for the highest level of comfort, functionality and versatility. Satisfaction is guaranteed for all our customers, whether military, law enforcement or responsibly-armed citizens. Our products are user driven and are designed based on the operational experiences of a wide variety of end users. https://www.highspeedgear.com