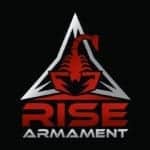 The Watchman from RISE Armament is now available in SBR and pistol versions.

Broken Arrow, Oklahoma — (ArmsVault.com) — RISE Armament, a premier manufacturer and
supplier of AR firearms and components, is pleased to announce they have expanded their line of Watchman™ law enforcement rifles.

The Watchman is now available in two compact versions — as a pistol or as an SBR. Both versions feature an 11.5-inch match-grade 416R stainless steel barrel with a carbine-length gas system. The barrel is chambered in .223 Wylde for accuracy with .223 and 5.56 ammo. It features proprietary fluting for weight reduction and is sub-MOA accurate with factory ammo. The rifles also have a 10-inch RISE aluminum handguard that is M-LOK compatible with a 12 o’clock Picatinny upper rail system.

The pistol has an SB Tactical SBA3 pistol brace, and the SBR has a Magpul CTR stock.

“We want to make sure officers are equipped with the weapons they need, so we’re excited to offer these two new standard versions of our Watchman rifle,” said Matt Torres, president of RISE Armament.

The company developed the Watchman rifle with input from SWAT/SOT/SRT officers, patrol officers, military snipers, competitive shooters, and firearms instructors to ensure it combines the best in functionality, accuracy, dependability, and affordability. From a squad car to an entry team, it’s duty ready.

The Watchman’s features include RISE’s Veil flash hider — which minimizes flash without the tuning-fork effect of other four-prong flash hiders — forged aluminum upper and lower receivers, an ambidextrous safety, and a premium black nitride-finished bolt carrier group. The Watchman also has RISE’s LE145 Tactical Trigger, which boasts a crisp, balanced break and 4.5-pound pull. It has a Magpul pistol grip and includes one magazine.

The Watchman is backed by RISE’s lifetime warranty, and it also includes RISE’s Blue Line Backup. If an officer is involved in a justified shooting with his or her Watchman rifle, RISE Armament will replace the rifle with an equivalent loaner, at the company’s expense, until the original one is cleared for duty.