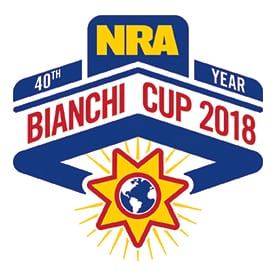 COLUMBIA, Mo. – (ArmsVault.com) – The National Rifle Association proudly announces Colt as the Presenting Sponsor of the 2018 NRA World Action Pistol Championship and the NRA Bianchi Cup, scheduled for May 19-25, 2018, at the Green Valley Rifle & Pistol Club in Hallsville, Missouri.

The competition, celebrating its 40th year, attracts the top pistol shooters in the world and features athletes from Australia, Canada, Germany, Japan, New Zealand, and several other countries in addition to those from the United States. Shooters are divided into categories based on age, gender, and the number of modifications made to their pistol. The NRA World Action Pistol Championship, scheduled for May 19-20, is celebrating its 11th anniversary in 2018.

“It is an honor to be the Title Sponsor on the 40th Anniversary of the NRA Bianchi Cup. We take pride in our legacy as supporters of the shooting sports, especially in our long-standing association with this prestigious event,” said Paul Spitale, Colt’s Senior Vice President of Commercial Programs. “Competitions like the NRA Bianchi Cup showcase the world’s highest echelon of shooting sports athletes. Their dedication and skill inspires us to create products that will exceed the expectations of the competitors.”

About the National Rifle Association
Established in 1871, the National Rifle Association is America’s oldest civil rights and sportsmen’s group. Five million members strong, NRA continues its mission to uphold Second Amendment rights and is the leader in firearm education and training for law-abiding gun owners, law enforcement and the military. Visit http://www.nra.org

About Colt’s Manufacturing Company LLC
Colt’s Manufacturing Company LLC is one of the world’s leading designers, developers and manufacturers of firearms. The company has supplied civilian, military and law enforcement customers in the United States and throughout the world for more than 175 years. Our subsidiary, Colt Canada Corporation, is the Canadian government’s Center of Excellence for small arms and is the Canadian military’s sole supplier of the C7 rifle and C8 carbine. Colt operates its manufacturing facilities in West Hartford, Connecticut and Kitchener, Ontario. For more information on Colt and its subsidiaries, visit http://www.colt.com.