(ArmsVault.com) – Seeing the rise in popularity of “Slim Nines,” Honor Guard set out to design a full-powered 9×19 striker-fired semi-auto pistol with some out-of-the-box thinking combined with input from a few of the industry’s most respected names. The Honor Guard standard version and FIST variation are featured in the February issue of GUNS Magazine in a full report on their performance and handling from contributing editor Massad Ayoob.

A diverse group of shooters shot the test guns using different ammo brands and bullet weights. Mas concludes, “There is a lot to like about the Honor Guard pistols. I appreciate the tactical thought in the FIST option, which is going to be worth either nothing or the whole rest of your life, depending how your particular fight for survival goes. Reliability is, of course, the non-negotiable baseline in firearm selections, and it looks to me as if the Honor Guard passes.” 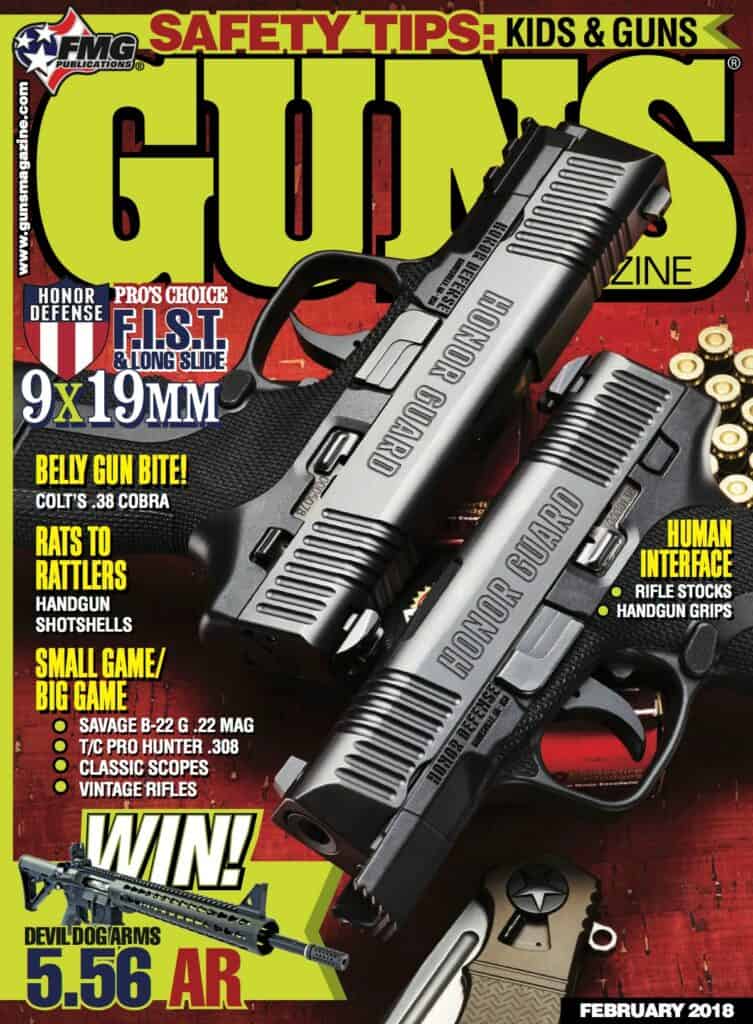 Colt’s iconic Cobra has been updated for reissue after its 1981 departure from the market. Though it bears a resemblance to its predecessor, the 2017 version features all-stainless steel construction and some ergonomic and mechanical refinements. John Taffin ran the .38 Special snubbie through nearly two dozen different types of factory ammo and was impressed with the Cobra’s performance and shootability.

“I was surprised at how comfortable shooting the Cobra now is. There is no way I could spend several hours shooting my original. No matter what I tried the Cobra performed flawlessly. I was actually disappointed when I ran out of loads to try,” he says.

Your old rifle collecting dust in the corner can breathe new life again. In the February “Rifleman” column, Dave Anderson explains how improved scope and bullet technology can make any old favorite more efficient and effective. In “Montana Musings,” Mike “Duke” Venturino takes stock of his ample collection and tackles the question “Which gun would you sell first? Which is the most expensive? Which one is your favorite?” Curious readers will be surprised to learn the answers. And with some help from a young friend, Will Dabbs, MD, demonstrates how to “Raise ’Em Right” by introducing kids to the shooting sports in the latest installment of “Shooter’s Rx.”

The impressive Devil Dog Arms DDA RIS-15 tops the prize package giveaway for February. Among its many features, this AR includes a gas impingement system, 16-inch barrel, DDA Tactical Muzzlebrake and an ALG QMS trigger. The winner will also receive a Mini Commander by Emerson Knives and a 5-Pack of Hurley’s Gold All-In-One lubricant. Altogether, the package is valued at $1,435.94. Readers are encouraged to enter for their chance to win by visiting www.gunsmagazine.com/giveaway.

Exclusive content is just a click away in every issue of GUNS. This month’s Online Feature, “Doomsday Defense” proves there’s no such thing as too much handgun with Rock River’s .300 AAC LAR PDS. The February issue of GUNS is on newsstands now with a digital version available for purchase online at www.gunsmagazine.com/digital-version.