“Stan has a life-size iron bison target barely visible from the 800-yard bench and the angle presented a slight crosswind. Lacking a ballistic table for the 175-grain Gorilla load, [he] estimated the proper elevation and windage and one round put him on the target. The initial five rounds went into an 8-inch (1-MOA) group. This is sterling performance from a semi-auto that would also be right at home on the battlefield (or equally suitable for game hunting),” Cumpston reports. 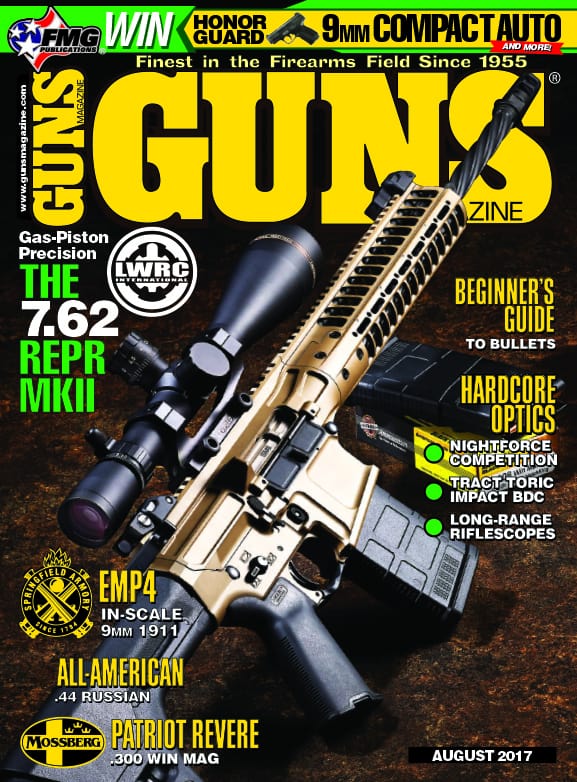 In “A Less-Filling Handful,” Springfield Armory’s EMP4 solves the 9mm/1911 conundrum. While a lot of engineering has gone into “shoehorning” the 9mm cartridge into the frame designed for the .45 ACP, the simplest solution is the one Springfield Armory pursued in the EMP series. Editor Jeff John says, “The EMP4 is suitable for tasks from CCW to IDPA to plain plinking fun… As it stands, [it] does just about everything I want a gun to do today. And it does so better than most.”

For novice shooters, August’s GUNS offers an introduction to the most commonly used bullets in “The Missile Type.” ML McPherson breaks down the difference between birdshot, buckshot, jacketed and cast rifle and handgun bullets, and the nuances of each. John Barsness observes the trends affecting long-range shooting as rifles and optics incorporate burgeoning technologies in “Moving The Goal Posts.” And the Egyptian Hakim, one of the world’s oddest battle rifles, owes its genesis to the quirky Swedish Ljungman as covered in this month’s “Surplus, Classic And Tactical Firearms” column.

The Honor Guard HG9SC tops the prize package this month. Features of this rugged 9mm include a 3.2-inch stainless steel barrel, 7-pound trigger with short reset, bright orange front sight and custom textured grips. A Lyman Essential All-In-One Cleaning Kit and a Gerber Center-Drive Multi-Tool will encourage the winner to keep their equipment clean and efficient. The total package value is $667.50. Readers are encouraged to enter the free drawing online by visiting www.gunsmagazine.com/giveaway.

Exclusive content is just a click away! “Carry Rigs That Work” is this month’s Online Feature imploring readers not to agonize over the “right gun” just to grab the first holster they see. The August issue of GUNS is on newsstands now with a digital version available for purchase online at www.gunsmagazine.com/digital-version.