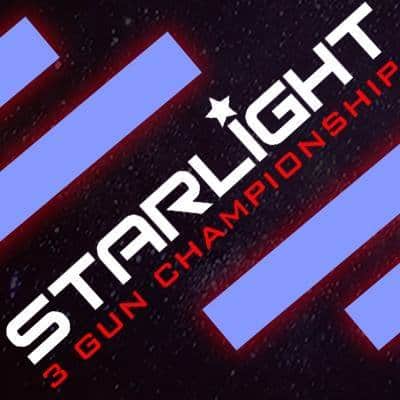 MORRISTOWN, TN. (March 13, 2017) – (ArmsVault.com) – Starlight 3-Gun LLC, the company behind the shooting industry’s only nighttime national 3-Gun match, announced today the divisional winners of the 2017 Championship. In the race for the overall crown, it was Armalite Team Captain and Timney Triggers professional shooter, Greg Jordan, who took home top honors during this year’s championship.Jordan’s ability to remain focused despite ever changing weather conditions, while fending off a top-flight field of competitors, earned him a $15,000 payday along with the coveted Timney Cup.

Jordan’s impressive run during the 2017 Starlight 3-Gun Championship almost ended with him sweeping all of this year’s top prizes, but his attempt was cut short during the final SIG SAUER® Championship stage. Defending champion and hometown favorite, Nick Atkinson, was able to defeat Jordan for the $5,000 winner-take-all prize, as the two competitors raced head-to-head using stage guns provided by SIG SAUER. Atkinson would go on to finish the match in third place overall, finishing only 1.4 seconds behind second place finisher Jesse Tischauser.

“It’s an incredible feeling to be able to bring home the Timney Cup for Team Timney,” said Pennsylvania native Greg Jordan. “I had an absolute blast competing in this year’s championship. If you’ve never had a chance to shoot a match at night, you are certainly missing out.”

Jordan continued, “There were so many great sponsors at this year’s event and the Copperhead Creek Gun Club was a tremendous host all week. I would like to thank all of my sponsors as well as give a special note of thanks to John Vehr of Timney Triggers and Jim Shepherd for bringing their vision to life. The 3-Gun community is certainly lucky to have such a great group of individuals and companies supporting us and our sport.”

“Based on the feedback that we received from this year’s competitors, sponsors and spectators, the 2017 Starlight 3-Gun Championship was an enormous hit,” said Starlight 3-Gun organizer Jim Shepherd. “The biggest names in the sport descended upon Marble Falls over the weekend and with them came a level of competition and excitement unlike anything in the industry.”

“A special tip of the cap goes to our match director Chuck Anderson for keeping the match flowing smoothly despite Mother Nature’s best attempts to derail it and to Travis Gibson and his crew at MGM Targets for handling the intricate course layouts,” added Shepherd. “Without their involvement as well as the numerous other range officers, support staff and volunteers, a match of this size would not be possible. We are already making plans and improvements for 2018 and look forward to keeping the shooting world on its toes as we continue to push the sport of 3-Gun to new levels.”

For more information regarding the Starlight 3-Gun Championship, be sure to follow us on Facebook – @starlight3gun – or visit www.starlight3gun.com.