Inland Manufacturing to Host WWII Side Match at Starlight 3-Gun

Inland® Manufacturing to Host Side Match at Starlight 3-Gun

Fashioned to serve as a tribute to the 75th anniversary of World War II, the self-contained side match will allow competitors and spectators the chance to use reproductions of military firearms produced by Inland Manufacturing in live-fire competition. In order to compete in this one-of-a-kind side match, event attendees will be assessed a small fee of $5. Proceeds generated from the side match will be divided equally for contingency payouts and to help with fundraising efforts to support industry stalwart Chris Cerino, as he undergoes cancer treatment.

“Throughout its history, our company has always been a staunch supporter of competitive shooting,” said Ron Norton, President of Inland Manufacturing. “As we began to discuss our involvement with Starlight 3-Gun, there were several objectives that we wanted to accomplish. Not only did we want to provide a creative way to honor the anniversary of World War II, but we also wanted to give back to the sport itself by recognizing the athletes in this year’s competition. To be able to accomplish these two initiatives while also helping to support Chris Cerino and his family, who have been great ambassadors for our industry, is a perfect way to reinforce our involvement with this year’s Starlight 3-Gun Championship. 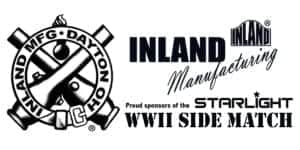 On Thursday and Friday (March 9-10) during this year’s championship, attendees will have the chance to shoot an exciting array of firearms from Inland Manufacturing. Using the company’s venerable 1911 Pistol, M1 Carbine and M37 Trench Shotgun, attendees will be able to participate firsthand in this unique side match. In addition to these models, Inland Manufacturing will also provide the public with a first chance to demo their new PM-22 Suppressor. Constructed with an aluminum tube and stainless steel base, the PM-22 features an I-Core polymer monolithic disposable baffle system. This unique system allows for easy maintenance and disassembly as well as the ability to replace the baffle design if ever damaged.

For more information regarding this year’s 2017 Starlight 3-Gun Championship, be sure to visit www.starlight3gun.com.