GENESEO, IL, January 5, 2016 – (ArmsVault.com) – Springfield Armory® is proud to announce an incredibly successful inaugural “Senior” year for Team Springfield Captain Rob Leatham. Leatham marked 2016 with his 55th birthday, launching him into a new phase of his successful professional shooting career. During the past year, he not only competed in ten major events as a Senior, but won the Senior Championship
Titles in all. 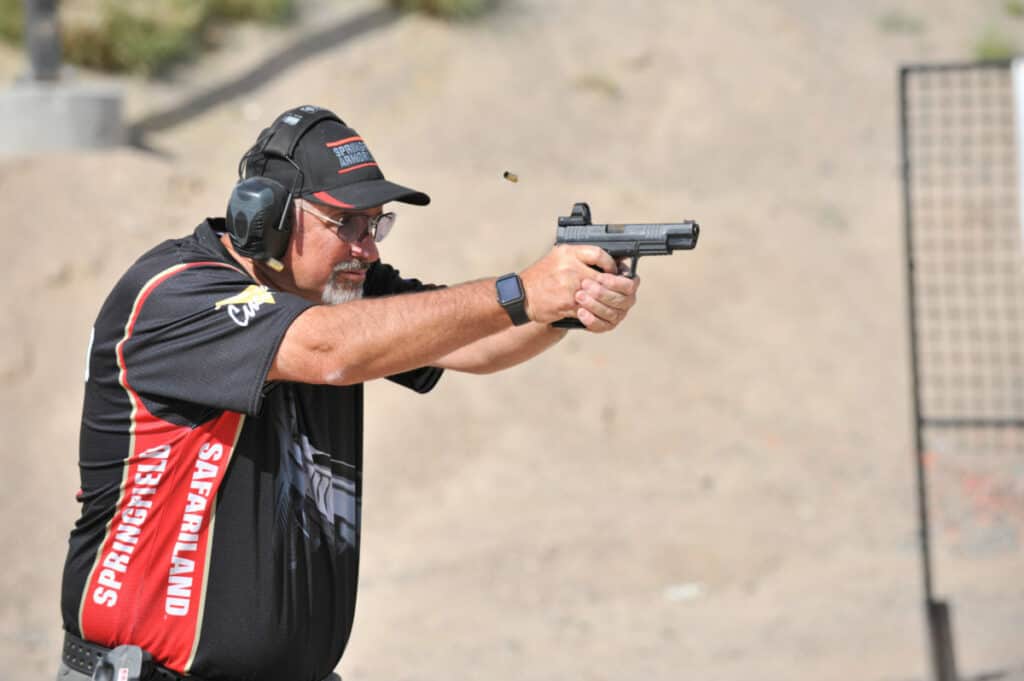 “One of the things I love most about competitive shooting is that it’s a lifelong activity,” noted Rob Leatham. “I’ve been shooting competitively since the late 1970’s, and I’ll be doing it as long as I can foresee. It’s a sport of discipline and concentration, so age doesn’t matter nearly so much as it does in other sports.”

Proving the point that shooting is a sport for all ages, Leatham has been mentoring the team’s two youngest sponsored shooters, Jalise and Justine Williams, age 14 and 13 respectively. Under the direction of their coach Glen Wong and Team Captain Leatham, the pair is well on their way, although they’ve got many years of competition ahead to match Leatham’s lifetime of achievements.

Leatham has excelled in other competitive disciplines as well, having won eight Steel Challenge World Speed Shooting Championships. And, in what many consider the ultimate test of handgun shooting skill, Leatham has won ten NRA Bianchi Cup / Action Pistol Championships.

“I’ve been honored to compete for all these years with Team Springfield,” says Leatham. I’m thankful for the opportunity to keep representing this great company and to help their next generation of shooters as well. I plan to keep doing this for a long, long time.”

“The First Name in American Firearms,” Springfield Armory® was founded in 1777, when George Washington ordered the creation of an armory to store ammunition and gun carriages during the American Revolution. In 1794, the armory began to manufacture muskets and spent the next 150 years supplying firearms for every major American conflict. The original armory closed in 1968. In 1974, the Reese family took ownership of the Springfield Armory® name and began making the M1A™ rifle. Today, Springfield Armory® develops many products loyal to the company’s heritage, like the 1911 pistol, while ensuring its future with innovative products, including the XD®, XD® Mod.2®, XD(M)® and XD-S® polymer pistols and now the new SAINT™ AR-15 rifle.