Kimber’s Peach Of A Pair Inside GUNS November 2016 Issue

The “momma” in the cover story is the Amethyst Ultra II .45 ACP with its pronounced purple finish and border engraving. According to Davison, a firearm instructor and former L.E.P., the Amethyst is designed to appeal to women. However, she thinks the “popper,” the smaller, more easily concealed .380 Micro Carry in Stainless Rosewood, is near ideal for many of her female students. Cumpston and Davison describe both Kimbers as showing “outstanding overall fit and metalwork” and cycling smoothly without the need for a break-in — a quality of hand-fitted custom pistols. 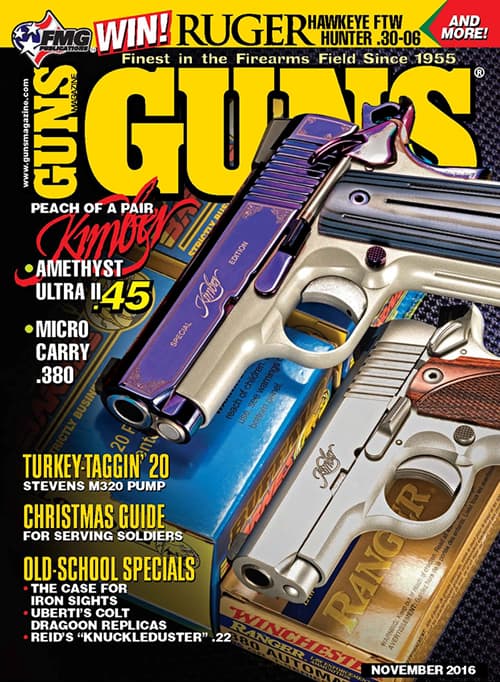 Other highlights in the November issue include John Sheehan’s “Witness to Catastrophe” about an unusual Mossin-Nagant rifle aboard a German U-Boat in WWI and Mark Hampton’s “Turkey-Bustin’ 20” where he relates why he chose the Stevens Model 320 Field Grade for his wife for turkey hunting. In the GUNS Military Gift Guide 2016, John Connor issues a reminder to remember our troops throughout the world this Christmas and provides suggestions on what to give them.

The Ruger Hawkeye FTW Hunter Rifle from Ruger takes center stage in this month’s GUNS Giveaway package. Other items include a Burris Veracity Riflescope with rings and mount adapter, a Breakthrough Ammo Can Cleaning Kit, the fixed-blade Ruger/CRKT Accurate, Walker Game Ear’s Razor Electronic Muff and a gift certificate from Bigfoot Gun Belts. The total value of the package is $2,614.89. Visit www.gunsmagazine.com/giveaway to enter for free!

Each issue of GUNS includes links to online-only extras. In this month’s online feature, “Leaner, Meaner GLOCK,” Will Dabbs explains why the GLOCK 43 can be the “perfect carry 9.” Readers can purchase a digital version of the GUNS November issue at www.gunsmagazine.com/digital-version.