“Baddest Bugout Duo” In The September 2016 Issue of GUNS Magazine

(ArmsVault.com) – The September issue of GUNS Magazine strikes a chord with Will Dabbs’ timely feature on Springfield’s SOCOM CQB .308 and the Gemtech-Supressed XD(M) .45 — a combination he calls “The Baddest Bugout Duo.”

The September GUNS Magazine cover story titled “The Baddest Bugout Duo” ensures readers will be well equipped to protect themselves and their families. Dabbs thinks Springfield’s SOCOM 16 CQB .308 and the Gemtech-Suppressed XD(M) .45 are the right combo to “unambiguously” send the message that you mean business. “Nothing seems to scream, ‘don’t screw with me, dude,’ like a chopped MIA and a suppressed. 45,” Dabbs says. The SOCOM 16 is the “most modern iteration of the venerable military arm” [the M1 Garand], and is “the pinnacle of modern .308 tactical tools,” while the XD(M), “a robust, reliable, mature weapon system,” is the “ultimate iteration of the proven and popular XD line of combat handguns.” 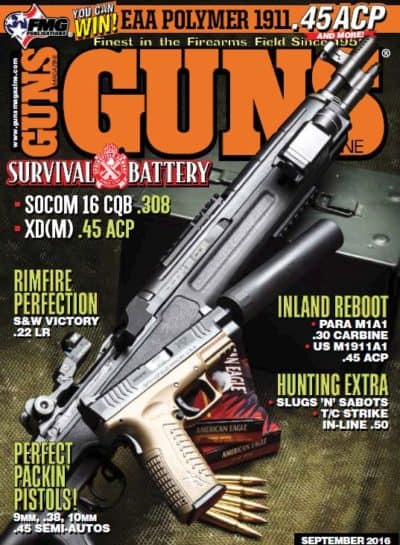 In another GUNS Magazine feature, Editor Jeff John takes readers on a journey back in time to the battlefields of Napoleon in his well-researched article “Voltigeur.”

GUNS Editor Jeff John’s feature “Voltigeur!” engages the reader with a captivating chronicle on how Napoleon transformed France’s weaponry and skirmishers into an “effective, fast-moving light infantry and artillery in battle.” Under the command of Napoleon, the “shortest men in a company” were selected to be among his elite troop of fighters called the Voltigeurs. From the “Dragoon musket to the Carbine de Versailles,” John elaborates on the weapons used by Napoleon’s Voltigeurs, along with a display of incredible color images.

Other highlights in this issue include Payton Miller’s “Slugging Away,” where he takes a swing at the questions “sabot or rifled? and smoothbore or not?” John Connor’s “Odd Angry Shot” entertains readers with his humorous accounts of being a foreigner in the vibrant and volatile world of Africa. And a must-read: David Codrea’s column, “Rights Watch,” addresses the current mood on Capitol Hill with regards to immigration and gun control.

EAA Corp’s 1911 Polymer Pistol is on target in the September GUNS Giveaway as well as other amazing prizes—total value is $1,088.80. Readers can visit www.gunsmagazine.com/giveaway to enter. It’s free!

Each issue of GUNS includes links to online-only extras. In this month’s online feature, “Short-Action Perfection,” Robert Kolesar lets readers know that “T/C Venture Compact’s accuracy in not an afterthought.” Readers can purchase a digital version of the GUNS September issue at www.gunsmagazine.com/digital-version.