During the three days of competition, more than 200 competitors from across the United States, Canada, Central America and Japan tested their skills in eight stages of fire made up of all steel targets. Using an electronic timer that records times to 0.01 of a second, competitors completed five runs on seven stages of fire and four runs on the last stage, with one “throw-out” run allowed per stage. Each competitor’s best runs on each of the stages were used to tally scores for individual stage results and a combined score of all eight stages was used to determine a final match score. 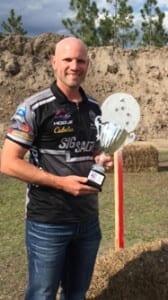 In this year’s Steel Nationals, Team Captain Max Michel had a remarkable run, earning a spot at the podium in every category he entered. Not only did Michel win the Rimfire Pistol Open Division title, setting a new national record of 60.66 seconds, but he also placed in the Open and Production Divisions. In the Production Division, Michel was able to set a new stage record en route to a 2nd Place Overall finish using the SIG SAUER P320®. Michel’s performance on arguably the most exciting stage of the match, “Smoke & Hope,” was truly one for the record books. After the smoke had cleared, Michel posted a total time of 6.86 seconds with a Production legal P320. Not only did this time set a new national record, but it was also the fastest time this particular stage had ever been completed using a centerfire pistol in any division since the Steel Challenge’s inception in 1981.

Michel also went on to place 3rd Overall in the Open Division shooting a SIG SAUER 1911. Michel’s combined times in each of the three events earned him an additional top honor with a 2nd Place Overall finish in the coveted race for the Steel Master title.

“This year’s competition was tougher than ever. The race for the Rimfire Division stayed close until the second half, then I was able to hit my stride and win the last four stages,” said Michel. “I learned a lot from this match, and I’m sure it will help with my preparation for the upcoming 2016 Steel Challenge/World Speed Shooting Championships in August. Congratulations to the division winners and a big thank you to all of the hard-working staff members who volunteered their time to make this match such a success.” 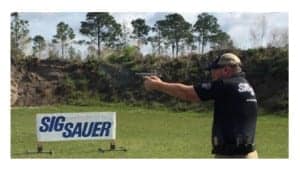 Fellow teammate and SIG SAUER Pistol Product Manager, Phil Strader, was also able to join Michel at the top of his respective leaderboard. Shooting a 9mm SIG 1911 Traditional Match Elite Stainless pistol, Strader was able to secure the Single Stack Division title. Strader finished the match with a final score of 103.17, while setting the fastest overall time on five of the eight stages of fire. Strader’s impressive win marks his fifth national championship and first title of the 2016 competitive shooting season.

“This year’s U.S. Steel Nationals hosted some of the best competitors from across the country,” said Strader. “The conditions were extremely tough with rainfall nearly every day of the match, but despite the weather the majority of scores posted didn’t seem to be affected. In fact, there were a number of records set in Florida this year.”

Strader continued, “Since the stages for this match remain the same each year, the challenge is to find the perfect balance between speed and accuracy. My congratulations go out to all of the division winners.”

SIG SAUER, Inc. is a New Hampshire-based weapons systems provider leading the industry in American innovation, ingenuity, and manufacturing. SIG SAUER® brings a dedication to superior quality, ultimate reliability, and unmatched performance that has made it the brand of choice among responsible citizens, and many of the world’s most elite military, government, and law enforcement units. As a complete weapons systems provider, SIG SAUER offers a full array of products to meet any mission parameter, from handguns and rifles to silencers, optics, ammunition, accessories, and airguns. The largest member of a worldwide business group of firearms manufacturers that includes SIG SAUER GmbH & Co. KG in Germany and Swiss Arms AG in Switzerland, SIG SAUER is an ISO 9001: 2008 certified company with approximately 1,000 employees. For more information on SIG SAUER, any of its products, or the SIG SAUER AcademySM, log on to www.sigsauer.com.