(ArmsVault.com) – The Magnum Research Desert Eagle .50AE makes a big statement on the cover of GUNS Magazine March issue. Executive Editor Payton Miller puts the powerhouse auto through its paces to see how this “Big Bad Bird” stacks up against less-potent competitors.

“The Desert Eagle .50AE would make a good choice for a handgun hunter operating out of a blind, particularly one where a rest — or Versa-Pod — could be used,” Miller says. “The .50AE itself obviously has more than enough power for deer and hogs. Revolver guys can argue indefinitely over the ‘most powerful,’ but with semi-autos, it’s no contest. The Desert Eagle .50AE is the biggest and baddest around.” 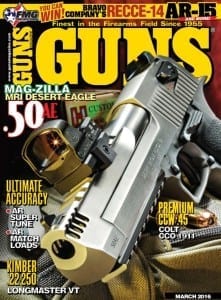 “Overall fit and finish is exactly what you would expect from Kimber,” Hampton says. “The LongMaster VT is a good-looking rifle. It’s big, but that’s exactly what I wanted in a serious, long-range varminter. My wife wanted to shoot the Kimber so we hauled it out to the farm with some steel targets out to 400 yards and she had no problem ringing steel at various ranges. The LongMaster VT paired with the .22-250 Remington is a perfect match, making it an ideal long-range platform with many features found in custom rigs. ”

Field Editor Mike Cumpston reviews the Wiley Clapp TALO Officer’s Model, proving how this classy, concealed-carry Colt is the “sort of pistol pistols ought to be.”

“The CCO is the third in line of Colt 1911’s commissioned by TALO,” Cumpston says. “Like the earlier Commander and the full-size Government Model, it is an amalgam of ideas from Wiley executed by gunsmith Pete Single and produced by Colt. The CCO features Single’s peerless checkering and fingerprint-checkered Altamount Grips. It is refreshingly retro and seems to work well.”

Other features in the March issue of GUNS includes an article by Glen Zediker on the NRA service rifle (and why the AR-style platform may have more in common with NASCAR than you’d ever guess), resident sixgun authority John Taffin’s list of “Perfect Packin’ Pistols” for the backcountry and columns covering new magazines for Luger lovers as well as how to add functional and eye-catching flair to your rifle stock.

Each issue of GUNS includes links to online-only extras. In this month’s online feature, Special Edition’s Editor Sammy Reese discovers the sub-caliber sting of Ruger’s 77/17 Hornet. Readers can sign up for a free digital subscription at www.gunsmagazine.com/digital-version.