(ArmsVault.com) – In the cover story of American Handgunner March/April 2016, Editor Roy Huntington tests the Kahr TP9 Gen2 Premium. The 9mm double-action pistol has a black polymer frame, a matte stainless steel slide, a trigger-cocking DAO, a lock breech, “Browning”-type recoil lug and a passive striker block. Since it’s a Premium model, it has the Walther rifling and barrel and its slides are machined with more detailing. The test gun came with a Leupold DeltaPoint Red Dot Sight.

Roy had plenty of good things to say about the “Ultimate Kahr.” He wrote, “Out of the box, this gun can compete, protect, hunt small game, plink and take on targets way out there. The TP9 could easily be the ‘one’ gun you compete with at weekend matches, take target shooting, plink with, carry concealed and keep on the bedside table to defend your family. It feels good in the hand and frankly, is friendly to use, so you keep wanting to pick it up and go shooting.” 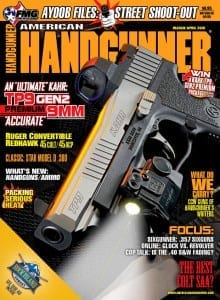 In “Packing Serious Heat: Confessions Of A Backsliding Gun-Guy,” Will Dabbs wanted to find out if he could carry a defensive firearm underneath light clothing without hurting himself or “printing” in front of his neighbors and coworkers. Dabbs chose four fairly large guns for his experiment: a Kimber TLE 1911, an S&W Model 66, an HK P30SK and a Steyr L40A1. After six months of carrying the guns IWB during a hot Mississippi summer, he got the answer: “It turns out you can indeed pack serious guns underneath light clothing … without being totally miserable. The secret is investing in the right gear and having the discipline to wear it every day.”

Roy Huntington takes a poll of the magazine’s regular staffers and asks them what guns they use on a daily basis. Readers can find out in “What Do We Carry?”

Also in this issue of American Handgunner are “Colt’s Best Single Action Army Models: The Peacemaker Centennials” and “Bring On The Horses: Battle Horse Knives’ Winning Strategy.” In addition, a “Close Look” at what’s new in ammunition and handguns are offered as well.

Interestingly, the Kahr TP9 Gen2 Premium on the cover of American Handgunner March/April 2016 is also the issue’s Handgun of the Month. Other items in the giveaway are the NT-03 Cordovan Folding Flipper from Klecker Knives, the Tuff Istow Pack from Tuff Products, the Flugz Hearing Protection from Otis Technology and the Acreage Bullet Catch from Ocken. Readers can enter the contest for a chance to win this package, valued at $2,304.98, by going to www.americanhandgunner.com/giveaway.

The American Handgunner March/April issue has three online-only articles. Online readers can learn more about the S&W 686, what would win between a GLOCK and a Colt Officer’s Model .38 Special and why the SCCY 9mm CPX is the “perfect” size for carry. Readers can sign-up for a free digital subscription to receive new issues at www.americanhandgunner.com/digital-version.