Code of Conduct by Brad Thor 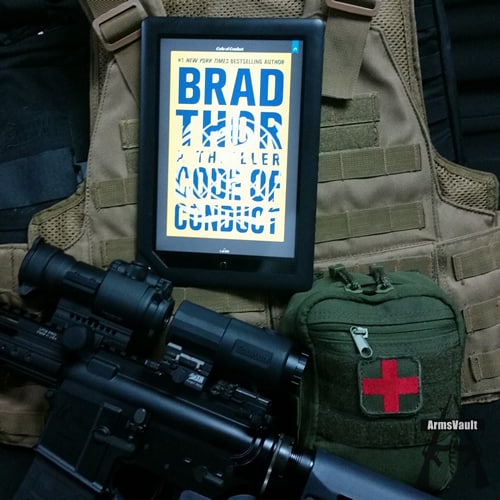 Code of Conduct by Brad Thor

A review of Brad Thor’s newest novel, Code of Conduct… from a gun owners perspective.

An extremely powerful sub-group of the United Nations (UN) plans to create a new world order (go figure), killing billions in the process. Their plan is well thought out, terribly violent, and has already begun. The future of the United States, and the rest of the world, ultimately depends on the efforts of counterterrorism operative Scot Harvath and his partners.

Every time I read a new Brad Thor novel, I’m convinced that it is the best one yet. The man just keeps stepping up his game!

The problem I’m facing with this review is that I really want to tell you why I liked Code of Conduct so much. Unfortunately, that gives away a little too much information about the book. And the last thing I want (aside from a UN-induced new world order), is a bunch nasty emails criticizing me for giving away too much of the storyline.

So, I’ll just tell you this… Code of Conduct isn’t one of those stories where the hero predictably saves the day at the last minute. It is much more complicated than that, which I really like! Once again Brad Thor presents the reader with a terrifying scenario that is, unfortunately, very realistic.

One last note about reading Brad Thor novels… All of his books (so far) are part of the Scot Harvath series. If you haven’t read any of his books, don’t worry… you can start with any of them. But that being said, all of his books are great! If you read one, you are going to be hooked. So, you might as well begin with his first book and read them all in order!

As in previous Brad Thor novels, Code of Conduct is loaded up with some goodness for gun enthusiasts.

You can’t always control the situation you find yourself in, but you can control how you react to it.
– Scot Harvath’s Mom