Wanamassa, N.J. (September 2015) – (ArmsVault.com) – Eagle Imports, Inc., the exclusive distributor of Metro Arms, SPS, Bersa, Comanche and Grand Power firearms products, is pleased to announce that each member of team Bersa emerged as a world champion by taking first in their class at the 2015 IDPA World Championships held at the US Shooting Academy in Tulsa, Oklahoma, Sep. 14-19, 2015.

“After the intense shooting and stiff competition I encountered over the last two weeks it feels so good to know that my Bersa teammates and I all won our events and emerged as world champions. Bersa for the win! I’d like to thank Bersa for making this possible, my BP9CC ran like a dream and I couldn’t have asked for a better gun,” said Gaston Quindi Vallerga.

“It’s amazing to see what Gaston and his teammates did at the IDPA World Championship. They’re as fast and as deadly of shooters as they come and the BP9CC and Bersa Thunder Pro XT are truly special guns. We’re proud to have three World Champions in our midst,” said Michael Sodini, President of Eagle Imports. 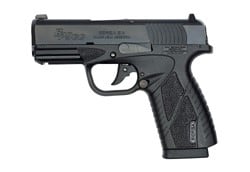 Instead of building around a subcompact frame like most concealed carry pistols, the BP9CC has a full grip that allows for a positive four-finger hold and less felt recoil. The full-size grip provides a higher carrying capacity than most subcompacts holding 8+1 rounds.

The striker-fired pistol features an integral locking system, loaded chamber indicator and automatic firing pin safety. The frame has a Picatinny rail for the addition of lasers and lights. The barrel bore has been micro-polished with sharp, deep polygonal rifling that results in shot after shot accuracy. It has a light, crisp and short trigger pull and interchangeable 3-dot sights.

Even though the BP9CC is more accurate, easier to shoot and offers a larger magazine capacity than other subcompact pistols, it remains as thin and compact as ever at only .94 of an inch wide, 4.8 inches high and 6.35 inches long. 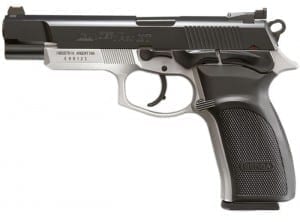 This exciting model is the brainchild of experienced sport shooters. Tested under the most adverse conditions, the Bersa Thunder 9 Pro XT is the epitome of accuracy and dependability. It’s a double-action/single-action hammer fired pistol that has completely ambidextrous controls. It holds 17+1 rounds and has a blue steel slide riding on a satin finished, aluminum alloy receiver. It has a long 4.96 inch barrel, fully adjustable rear sight and fiber-optic front sight. It has an ergonomic, checkered polymer grip that allows a strong yet comfortable grip for rapid follow up shots.

For more info on Bersa, visit https://bersa.eagleimportsinc.com/. To keep up-to-date with Gaston Quindi Vallerga’s adventures in the shooting sports, you can follow him on Facebook. To follow Rodrigo Suarez competitive shooting career visit his Facebook.

Founded in 1988, Eagle Imports is proud of its history and tradition of being an exclusive firearms distributor in the United States. Eagle is committed to fulfilling Bersa, SPS, Metro Arms, Comanche and Grand Power’s mission in the USA and for providing the ultimate after-sale experience for all of their products.  www.eagleimportsinc.com