December 2014 (TX) – Battle Rifle Company, builder of quality and affordable AR platform rifles has successfully performed a 10,000 round torture test in an 8 hour day on a BR4 Spartan, one of three rifles Battle Rifle Company produces predominantly for law enforcement.

The test took place in Houston, TX at Down Range Academy on Dec. 13, 2014. The entire Battle Rifle Company team was present along with media representatives from GunTest Magazine, The Cheaper Than Dirt Chronicle, Texas Law Shield and FMG Publications. Also present was retired Navy Seal Jeff Bramstedt, former Marine Recon Jeff Kyle (brother of the late Chris Kyle), and Jeremiah Sibley from the US Army. The Safety Officer for the test was Michael Rodriguez from AWATT.

The ammunition used was Federal XM 193 for all 10,000 rounds. Twenty C-Products Defense steel magazines were used, and cycled 10 at a time. The decision was made to use steel magazines verses Pmag® magazines due to the excessive amount of heat that is generated. At the 5,000 round mark, the BR4 Spartan went through a standard maintenance cleaning and a replacement of the gas rings.

In the first 5,000 rounds there was only one malfunction. There was a stovepipe round at the 3000 round mark. It was discovered that it was due to a damaged round. After that stovepipe, the round was eliminated from the cycling. There were two other stove-pipes at round 7,300 and 8,900. These were due to a worn out magazine spring. The magazine was discarded from the cycling, and testing continued. Mil-spec testing allows for four failures for every 6,000 rounds. The BR4 Spartan far surpassed Mil-Spec testing. 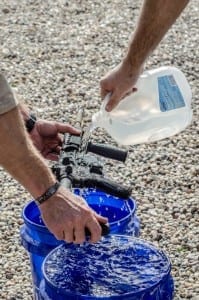 After each 300 round session, the barrel was cooled by pouring a slow stream of water over the entire barrel length of the gun and at every 900 round marker the receiver was also cooled in the same manner. Frog Lube® was used as the primary lubricating agent and was applied at 2500, 5000 and 7500 round stages.

“The BR4 Spartan is a tough rifle,” says Chris Kurzadkowski, owner of Battle Rifle Company. “We are thankful to our vendors for helping us build quality parts and our staff for putting in the dedication to build the best rifle we can. This test was our second attempt to accomplish this goal. We learned a lot from our first attempt, took that knowledge and went back to the drawing board. This test proves that we make a quality and reliable rifle system. We are dedicated to building nothing but the best.”