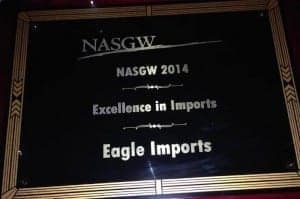 The award recognizes the contribution made by Eagle Imports, Inc. to the successful business climate of NASGW’s wholesaler members.

“We’ve been in business for 26 years importing high quality firearms at an affordable price from manufacturers worldwide, so it is a great honor to be the first recipient of the NASGW Excellence in Imports award,” remarked Sodini. “This award just solidifies our commitment to our manufacturers and confirms that we are on the right path when it comes to doing business.” 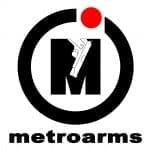 Metro Arms Corporation is the result of the combined passion for excellence in firearms manufacturing and the uncompromising pursuit to bring firearms of quality and value to the American market. Pistol lines include American Classic, MAC, and SPS. For more information, visit www.metroarms.com.

Grand Power was founded on the passion and expertise of CEO and owner Jaroslav Kuracina. After many attempts to have his innovative pistol produced in his home country of Slovakia, he finally succeeded through the generosity of private investors in 2002. Today, Grand Power is one of the up and coming firearms brands world-wide, winning awards at IPSC and on the battlefield. www.grandpowerusa.com

Founded in 1988, Eagle Imports is proud of its history and tradition of being an exclusive firearms distributor in the United States. Eagle is committed to fulfilling Bersa, Metro Arms, Comanche and Grand Power’s mission in the USA and for providing the ultimate after-sale experience for all of their products. www.eagleimportsinc.com