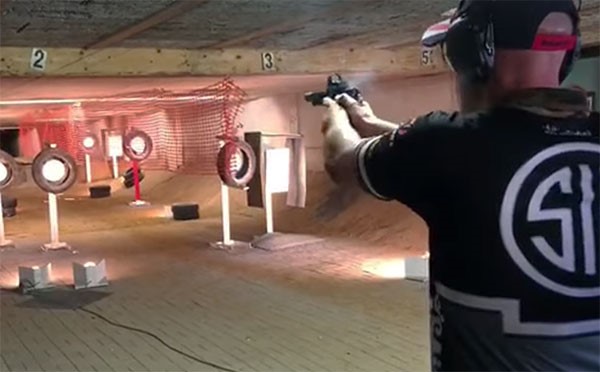 “As Max begins to prepare to defend his titles at the IPSC World Shoot in 2020, it’s great to see him go into these European competitions and come away with first place finishes,” said Tom Taylor, Chief Marketing Officer, and Executive Vice President Commercial Sales, SIG SAUER, Inc.  “His performances continue to dominate across the various divisions he competes in and his ability to compensate for various styles of shooting, depending on the match, is really impressive.”

For competition Max used a SIG 1911MAX at the European Steel Challenge, and a SIG P320X5 at the Infinity Open.  In both competitions he used the soon-to-be-released ROMEO3MAX, and SIG SAUER 9mm Match Elite Competition Ammunition.

“The IPSC style of shooting is very different in the fact that they use a target which is 30% smaller and a different shape than the USPSA target that I am accustomed to.  The courses are also formatted in a way that accuracy is more heavily weighted that raw speed unlike U.S. matches,” added Michel.  “Overall, despite the differences in style, I accomplished everything I wanted to and my SIG equipment was a huge factor in elevating my performance to these first place finishes.”

The ROMEO3MAX used by Max Michel in competition is a compact, open reflex sight featuring a 30mm Max round lens design for superior field-of-view, a special red-notch filter for a vivid red dot and unrivaled optical clarity, 6 MOA dot size for rapid target engagement, twelve illumination intensity levels, MOTAC activation, and up to 20,000 hours of runtime.  The sight is machined from aircraft grade aluminum in a matte black finish, with a side-loading battery tray, and waterproof (IPX-7 rated).

The SIG SAUER Match Elite Pistol Competition Ammunition used by Max Michel at the European Steel Challenge and Infinity Open is available for purchase at sigsauer.com/store.