Any new rifle purchase made by active duty military members between Sunday, May 12 – Saturday, May 18, 2019, will receive a FREE BHA Logo Rhodesian Sling with your order.

Cody, Wyo. – (ArmsVault.com) – Big Horn Armory (BHA), makers of big-bore firearms, would like to say thank you to members of the United States military branches with a special offer just for active duty military. Any active duty military member who makes a new rifle purchase from BHA’s website between Sunday, May 12 through Saturday, May 18, 2019, will receive a FREE BHA Logo Rhodesian Sling (a $75.00 value). Just provide proof of your current military status to receive your free gift. 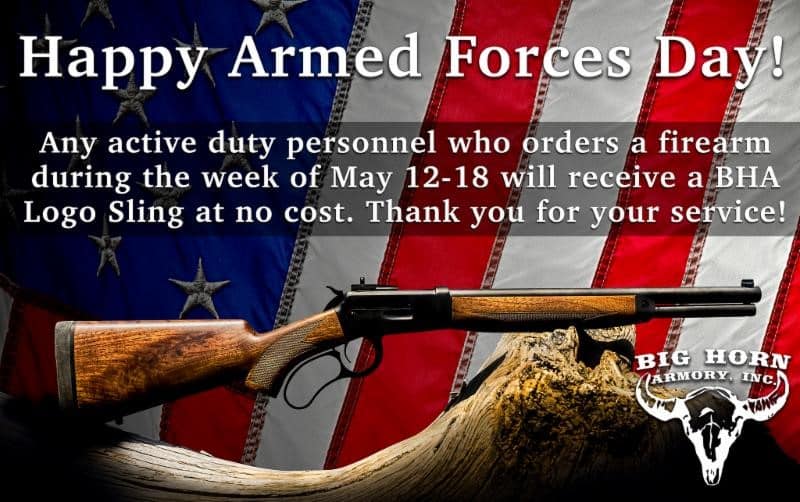 The Big Horn Armory Logo Rhodesian Sling is handcrafted in North Carolina out of high-quality domestic bridle leather and US-made solid brass hardware. It is a two-point sling that is compatible with any rifle with the standard sling mounting points. This sling features a forward loop and acts as both shooting support as well as a carry strap.

On August 21, 1949, Secretary of Defense Louis Johnson announced the creation of Armed Forces Day. Stemming the unification of the Armed Forces under the Department of Defense, the annual celebration now commemorates all branches of the military during one solitary day. The first official Armed Forces Day took place on May 20, 1950. It played an essential part in educating society and expanding public knowledge of the military and the role they play in the community. Today, this national holiday is celebrated on the third Saturday of every May and is exhibited by exercise, parades, and receptions that highlight and honor our amazing military and all of its strength.