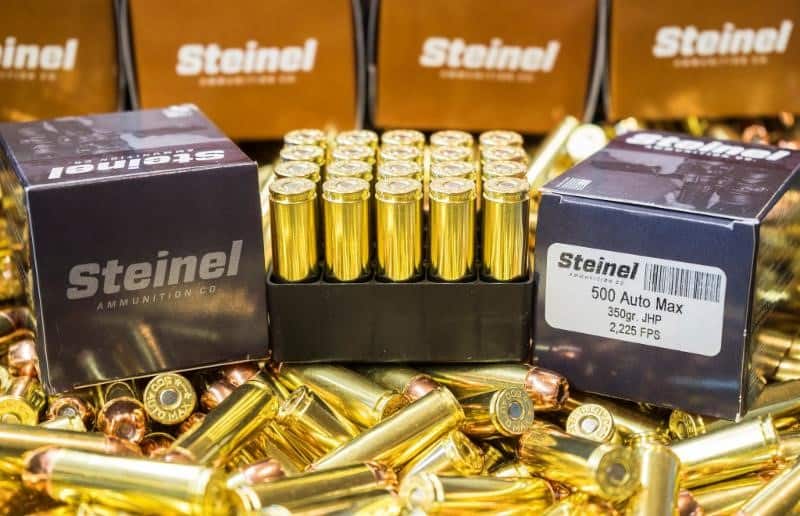 Steinel Ammunition is known for their pursuit of perfection. During the entire production process, the Steinel team is constantly checking every step of the way, from primer seating depth to final test penetration through Type A Ordnance ballistic gelatin.

Starting with .500 S& W Magnum cartridge, BHA removed the rim of the 500 S&W straight walled casing allowing it to function reliably in a detachable box magazine. The very versatile cartridge can handle anything from small to dangerous big game and makes an excellent breaching & vehicle interdiction cartridge when used with the AR500 as a law enforcement CQC or duty rifle.

“Steinel Ammunition is the latest ammo manufacturer to produce the .500 Auto Max round*. As a way of bringing added attention to this precision ammo maker and the highly reliable and accurate ammunition they produce, we are giving away one box of their new .500 Auto Max for every AR500 rifle or pistol purchased during the month of March,” Greg Buchel, president of Big Horn Armory, said.

Big Horn Armory, known by big game hunters the world over for their big bore lever action rifles, introduced the AR-Style AR500 in 500 Auto Max rifle, followed by the AR500 pistol with forearm brace and pistol brace buttstock, in 2018. Big game hunters, as well as law enforcement, have embraced the adjustable gas block rifle with sales being better than expected.

Steinel Ammunition Co. is a premium manufacturer of self-defense, hunting, and target ammunition. While other manufacturers may have a specific product line designated as “match” or “premium,” at Steinel—premium ammunition is all we do. We stand by our products 100 percent with a Satisfaction Guarantee return policy.