For SureFire, LLC is celebrating its 40th anniversary this year as the manufacturer of the world’s finest illumination tools, suppressors, and tactical accessories.

(ArmsVault.com) – Founded in 1979 as Laser Products Corporation, the company took tactical innovation into uncharted territory when it introduced the LPC Model 7, which incorporated a laser sight atop a Colt Trooper .357 Magnum, to become the world’s first commercially-available laser-aimed weapon. The LPC Model 7 created an entirely new market in the process, and Laser Products went on to develop other groundbreaking laser sights for a variety of weapons. As this technology became favored by military and law enforcement agencies, the company responded to their needs by developing weapon-mounted lights for handguns, followed by integrated WeaponLights for shotguns, submachineguns, and rifles. Those products fostered the development of the first compact high-intensity flashlight, the Model 6P, which created the premium tactical lighting market that SureFire has dominated for the past 30 years. 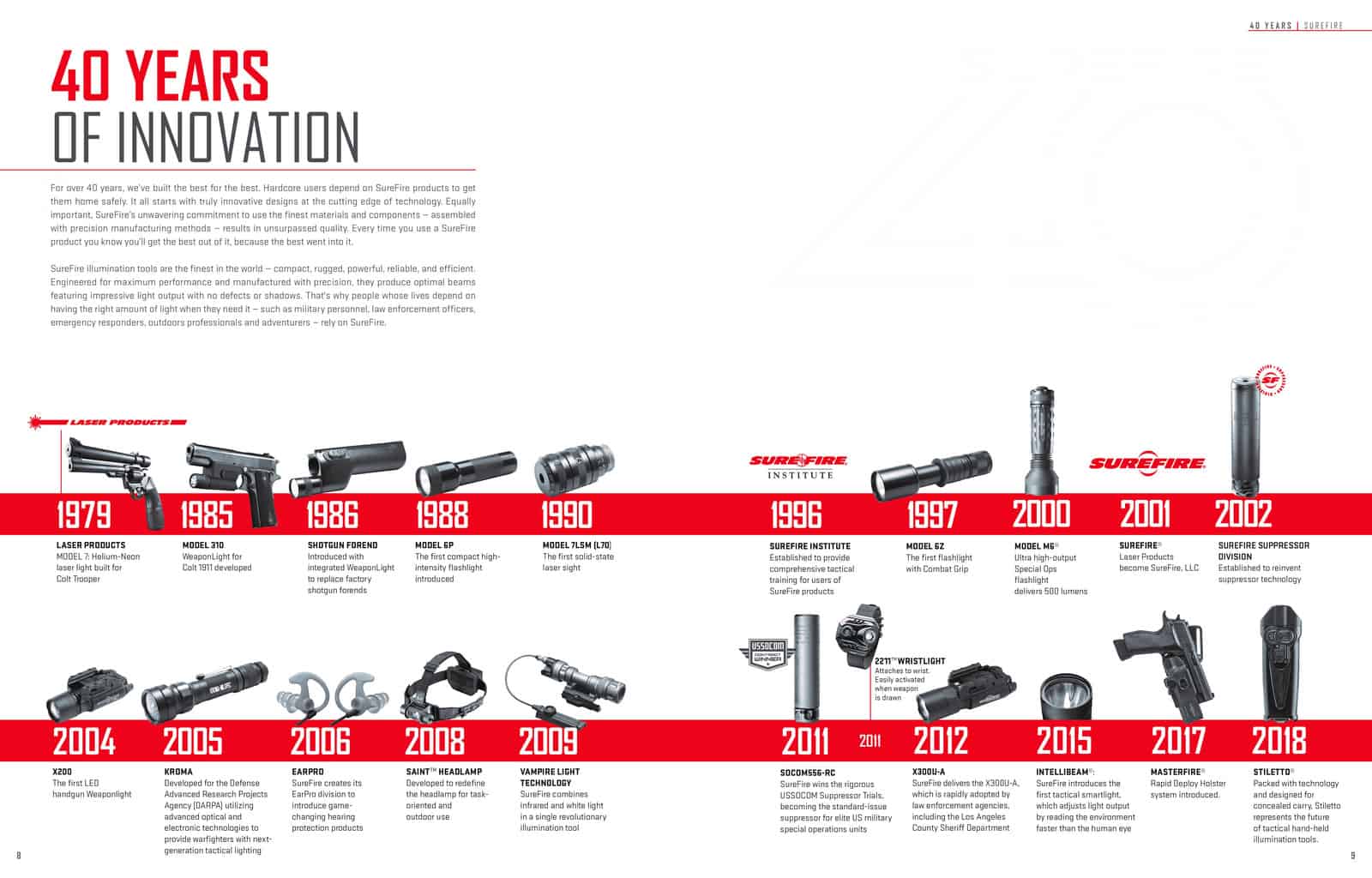 “We made our mark with laser sights and tactical illumination tools, but we didn’t stop there,” said SureFire president and founder, Dr. John Matthews. “Our basic mission has always been to produce products that help good guys who go into harm’s way, and we’ve never stopped innovating to give our customers the advantage they need and deserve.”

Now in its 40th year, SureFire remains the leader in extreme-duty illumination products and tactical tools, including innovative hands-free lighting, Ear Pro® brand hearing protection and communication devices, and battlefield-proven suppressor designs such as their SOCOM model, the official suppressor of the U.S. Army, U.S. Navy, U.S. Air Force and U.S. Marine Special Operations since 2011, a contract that was renewed in 2017.

Through four decades of technical innovation, one thing has never changed at SureFire, and that’s Dr. Matthews’ unwavering commitment to produce the best by utilizing advanced technology, precision manufacturing, and the finest materials and components — every SureFire product is engineered for maximum performance, no expense spared.

“It costs what it costs to make things right — and to employ American workers to do it,” Matthews said. “That’s just the way it is: We build the best, without compromise.”

With a 40-year legacy behind it, SureFire has its sights set squarely on the future. New models to be announced at the 2019 SHOT Show in Las Vegas are just the tip of the iceberg.

“I’m proud of what the SureFire team has accomplished, but I’m even more excited that we’re already laying the groundwork for the future, developing innovations that will redefine several market segments in which we are involved, and a few new ones as well,” Matthews said. “But this has never been about us. It has always been about our customers and helping them win the fight. They’ve had our back, and we’ll continue to have theirs.”

Located in Fountain Valley, California, SureFire, LLC is the leading manufacturer of suppressors, high-performance flashlights, weapon-mounted lights, and other tactical equipment for those who go in harm’s way, or anyone who demands the ultimate in quality, innovation, and performance. SureFire illumination tools are used by more SWAT teams and elite special operations forces than any other brand. SureFire is an ISO 9001:2008-certified company.