CONROE, TEXAS – (ArmsVault.com) – Aguila Ammunition recently announced that 5mm is now running limited production. The highly demanded round has been absent from the marketplace for several years.

“Our customers have been asking, and patiently waiting for our 5mm to return to the market since our initial run in 2008,” states John Domolky, Director of Sales for TxAT/Aguila Ammo. “We’ve been working with our manufacturing facility to bring this round back to the states for the past two years and are happy to announce we’ve made it happen.”

The new 5mm is a 30 grain, semi-jacketed hollow point with a 2200 FPS and will meet Aguila Prime standards. The product will also feature the new Aguila rimfire packaging and will be available at an MSRP of $29.99 per box.  Aguila 5mm will be available at retailers and dealers nationwide in January of 2019.

The limited availability of any 5mm caliber ammo has made this a highly sought-after round. Originally created for the 5mm Remington Rimfire Magnum, this bottlenecked cartridge has been discontinued by other manufactures since 1982, making it difficult for 5mm rifle owners to shoot their rifles. In 2008, Aguila Ammunition produced a limited run of their 5mm ammo at Tecnos, their manufacturing facility in Cuernavaca, MX. Today, the U.S distributor of Aguila, TxAT, is still manufacturing ammo at Tecnos.  However, a second production facility is being built near corporate headquarters in Conroe, TX to help increase needed capacity and produce ammunition domestically in the United States. 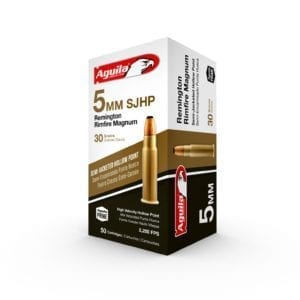 Aguila Ammunition is known as one of the largest rimfire manufacturers in the world, and is quickly gaining recognition among tactical, handgun, shotgun shooters and hunters alike.

Texas Armament & Technology (TxAT) is the exclusive distributor of Aguila Ammunition in the U.S. and Canadian markets. TxAT specializes in distributing high-quality brands around the globe including distribution into the Mexican market.  From marketing strategy, planning and implementation to operational optimization and logistics, TxAT has the experience to bring products to market both domestically and abroad, delivering solutions that deliver results.

For more information on Aguila Ammunition, visit the company website at www.aguilaammo.com