Wilkinson Dominates the 2018 FCSA World Championships with His Steyr HS.50

Wilkinson, a current Gunsite instructor from Edgewood, NM, shot a two-day aggregate of 290-10X for the Hunter Score, and his Light Gun Score total of 291-7X was the highest of any shooter in any class—most of whom were firing custom-built rifles from mechanical rests atop concrete benches. This marks his third World Championship in the Hunter Class with his Steyr HS.50 since his first win in 2012, and it is his first Light Gun Score World Championship.

Nestled at the base of the Sangre de Cristo Mountains, the Whittington Center’s 1,000-yard range plays host to notoriously fickle winds, especially in the afternoons. On the first day, Wilkinson was squaded on the afternoon Relays, 3 and 4. As usual, the switching and swirling winds proved to be a formidable foe for all shooters throughout the championships. Wind coming from behind the shooters was switching from 4 o’clock to 8 o’clock and back again, often changing within seconds. As a prone shooter, Wilkinson was able to very quickly make wind judgments and adjust his hold accordingly before taking the shot. He ended up dropping only five points in each class for a Hunter score of 145-5X and a Light Gun score of 145-4X at the close of day one.

“I couldn’t do anything wrong,” Wilkinson said. “It was like every time the wind changed, I knew exactly where to hold, and the bullets just kept going where I wanted them to. 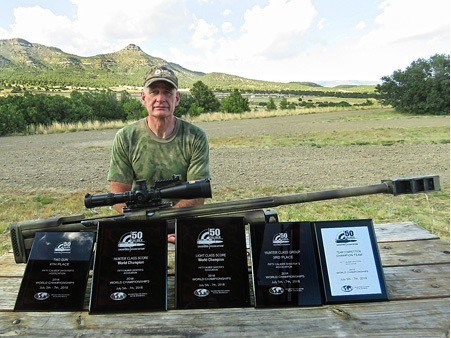 “The highlight of the day was the last two strings of fire in Hunter during Relay 4,” he continued. “I shot a 50-2X with a 9 3/4-inch group and a 49-2X with a 7 15/16-inch group. The 10-ring is right at 1.15 MOA, and when you keep them all in that, it says something about your rifle and your load. During both of those two strings, I changed from holding on the right side of the target to the left side during the string. That was very satisfying.”

Wilkinson was on Relays 1 and 2 to start day two, but while the winds had improved, the thermals coming off the six berms between the shooters and the targets at 1,000 yards required much more attention to elevation adjustments. Wilkinson kept on his fluid game of adjusting his position to match the conditions while firing—often firing within a split second of establishing his final hold—to finish the day with 145-5X in the Hunter Class and 146-3X in the Light Gun Class.

In addition to his two individual world championships, Wilkinson was also a member of the winning 4-shooter team. He placed third in Hunter Group with an average group size of 11.823 inches, and he placed fourth overall in the 2-Gun Aggregate, which factors the scores and the average group sizes from both class for a final score.

“Walt continues to astound me with his long-range-shooting abilities,” said Scott O’Brien, CEO of Steyr Arms. “This also confirms our company’s claims that Steyr’s arsenal of tactical rifles are the best performing rifles on the market, right out of the box with no extra features needed. You can not only compete with all other brands right out of the box at any price point, but you can also win against all other competitors, including those with custom-built guns. We are extremely excited to hear about Walt’s continued successes.”

Prestigious. Legendary. Reliable. The principles that you know Steyr Arms for today were first established by Josef Werndl when he launched Steyr Mannlicher in 1864 with the production of the modern breech-loading rifle system. His patented firearm was renowned for its quality and unique tabernacle gun lock. It was so revered that demand for the rifle quickly grew across the world. Soon, the precursor to Steyr Arms was producing 8,000 rifles per week. Through the decades, Steyr has stared down many challenges and met each with flying colors. Today, Josef Werndl’s drive to produce the most reliable firearms on the market is alive and well in the company. Steyr manufactures top-of-the-line guns that are distinguished as accurate, proven and engineered for precision. In the twenty-first century, Steyr Arms continues to build on its legendary reputation by delivering the best out-of-the-box firearm to its consumers. Steyr Arms is the subsidiary headquarters of Steyr Mannlicher in the U.S. For more information, contact Steyr Arms at 2530 Morgan Rd., Bessemer, AL 35022; call (205) 417-8644; or visit www.steyrarms.com.