This Precision Rifle Series (PRS) match will be held July 28 – 29, 2018 in Cody, Wyoming at the Cody Shooting Complex and at Monster Lake Ranch. Slots filling up quickly. 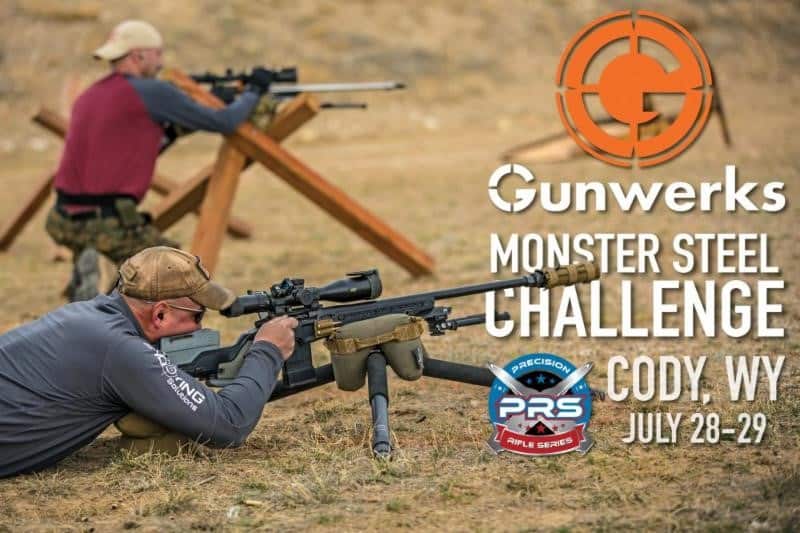 The first match day, held at Cody Shooting Complex, will include 10 stages in a fast-paced, square, range-style set-up. Day two, at Monster Lake Ranch, will provide competitors with a 270-degree fire fan allowing for some incredible vistas and challenging shots. Competitors will require 200 rounds for both days not including sight-in or confirmation shots.

Equipment restrictions are based on caliber and velocity only. Speed limit is 3,200 fps for all calibers and calibers allowed for the Monster Steel Challenge are .224 to .308.

“Gunwerks is very proud and excited to be hosting our first-ever Precision Rifle Series right here in our backyard,” Aaron Davidson, Gunwerks founder and CEO, said. “The courses will be challenging and the vistas that Wyoming will be offering the competitors will be outstanding.”

The Precision Rifle Series (PRS) promotes the growing sport of long-range precision shooting competition through an annual points race. The PRS includes several series, such as the PRS Bolt Gun Series, the PRS Gas Gun Series and the PRS Club Series. The PRS provides a national framework as the aggregate point for local, regional and national matches through tracking scores and promoting the sport of long-range rifle shooting in a safe, fair and practical manner for all shooters of all skill levels and ages.

Gunwerks shooting systems are capable of shooting accurately to 1,000 yards, right out of the box. For over ten years, founder Aaron Davidson and his dedicated group of employees have designed custom rifles for precision long range shooting. Every shooting system is the result of a carefully calculated mix of science, engineering, function and fit, design and materials in the right hands producing top of the line hunting and range systems. Slots for competitors are limited. Registration is available at Gunwerks with a $250 non-refundable registration fee. Check out the Gunwerks Monster Steel Challenge PRS Match!

Gunwerks, LLC is a Cody, Wyoming based manufacturer and provider of premium long-range rifles, optics, training and accessories.

For over a decade, Gunwerks has been the pioneer in improving shooting and rifle technology. Leading the gun manufacturing industry, Gunwerks develops systems that both better the shooter’s experience and their safety.

From the bipod to the ballistic turret and everything in between, their shooting systems come ready to go. While other manufacturers were letting customers mount their own scopes and test their own loads, Gunwerks was delivering a shooting system capable of shooting accurately to 1,000 yards, right out of the box. www.gunwerks.com.