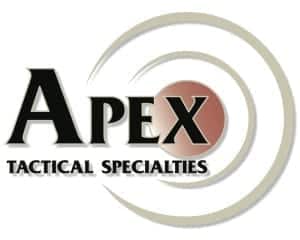 PEORIA, Ariz. – (ArmsVault.com) – Working with top pistol customizers and accessory suppliers, Apex Tactical Specialties has collaborated with firearms maker FN on a one-of-a-kind matched set of Thin Blue Line themed FN 509 pistols. Each of the pistols will be on display during the NRA Show, May 4 through 6 in Dallas, Texas, with one in the Apex booth (#6405) and one in the FN booth (#7733).

“We’re very excited to unveil at this year’s NRA Show this special and unique set of FN 509 pistols featuring the Thin Blue Line theme. The project is the result of Apex’s collaboration with FN, as well as Blowndeadline, SSVI, Inforce and Springer Precision. The pistols are outfitted with Apex’s soon-to-be released Action Enhancement Kit,” said Scott Folk, COO of Apex and the co-designer of the new trigger kit. 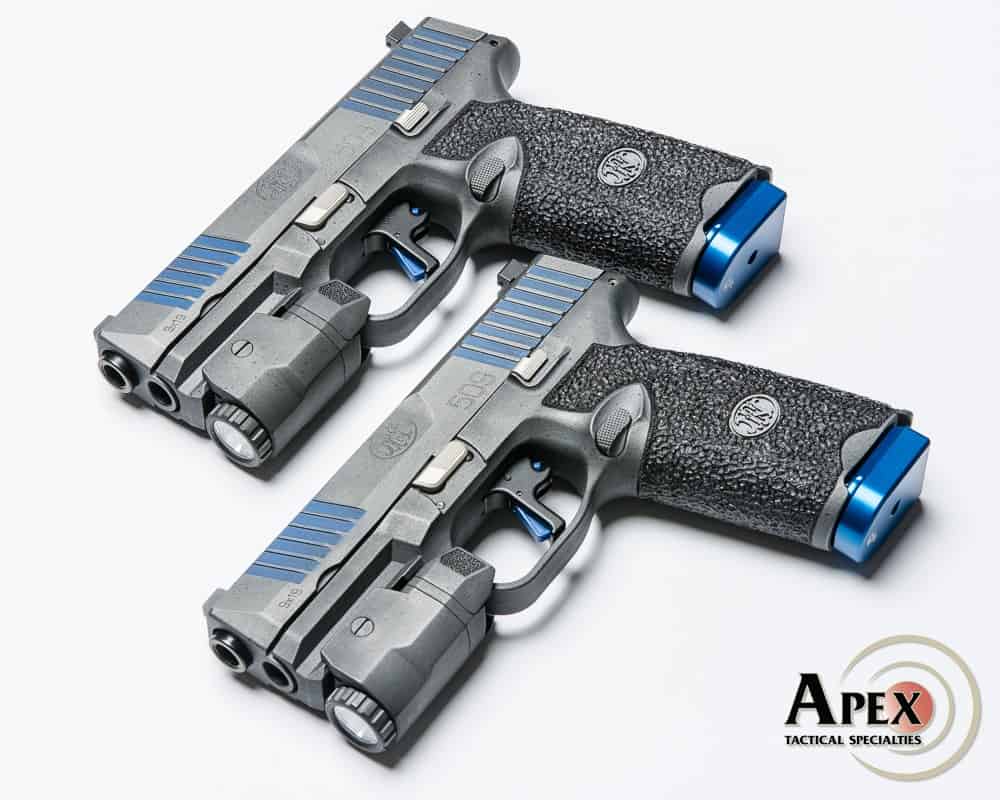 Designed and manufactured by Apex, the new patent pending Action Enhancement Kit is the first and only aftermarket trigger upgrade for the FN 509 model pistols and consists of an Apex Flat-Faced Trigger, mounted on an Apex designed trigger bar, paired with an Apex Performance Sear. The new kit is scheduled for release this summer.

To give the set of FN 509 pistols their distinctive Thin Blue Line look, Apex once again turned to the industry’s favorite Cerakote and stippling team of Mike Sigouin of Blowndeadline Custom and Damon Young of SSVI. The two have collaborated on previous Apex show guns as well as many of the industry’s most noted custom builds.

However, it’s the work of Blowndeadline Custom and SSVI that gives the pistol its unique appearance. Pulling from a Cerakote color palette consisting of NRA blue and a custom platinum mix, Blowndeadline created a two-tone finish. The finishing touch is the signature look of SSVI’s 360º texturing and hard edge bordering.

The upgraded and customized Apex FN 509 Thin Blue Line pistols are valued at over $2,150 each and will be on display throughout the 2018 NRA Show in the Apex and FN booths, garnering what is sure to be a great deal of attention from show attendees.

The World’s Most Battle-Proven Firearms.® | FN America, LLC, is a U.S. subsidiary of FN Herstal, S.A., a global leader in the development and manufacturing of high quality, reliable firearms for military, law enforcement and commercial customers worldwide. Headquartered in McLean, Virginia with manufacturing operations in Columbia, South Carolina, FN America is passionately committed to providing its customers with a portfolio of products, training and support services under the FN brand name that enhance their performance and safeguard their lives. For more information, visit us at www.fnamerica.com or follow us on Facebook, Twitter and Instagram.