(ArmsVault.com) – Shooting Industry’s December issue is rich with insight, sales tactics and scores of new products intended to give dealers a head start on early-year profits. Features include a year-end reflection of the ways the industry changed in 2017, including firsthand observations from retailers across the country. An in-depth preview of the 40th annual SHOT Show, an exclusive look at 2018’s new products and the Greatest Buyer’s Guide In The Universe round out the giant issue’s content. 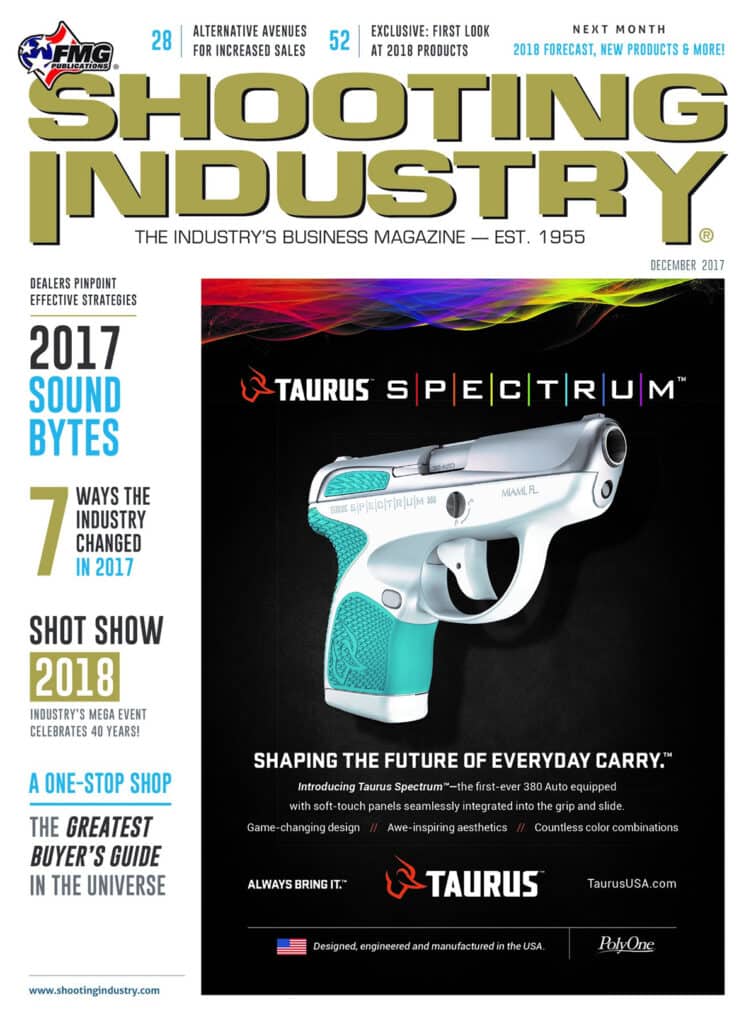 Over the course of 2017, Shooting Industry interviewed 82 dealers from 34 states who provided personal accounts on how to operate a successful storefront in today’s competitive environment. In “Sound Bytes Of 2017,” dealers identified positive trends, such as the shift in the consumer market where enthusiasts are now making discretionary (rather than compulsory) purchases. In this “new normal” one thing remains incredibly important: Effective marketing is critical to success.

Matthew Tyler, VP of development at SafeSide Tactical in Roanoke, Va, shares, “The best way to market any business is to market in as many ways possible. We have over a dozen billboards at any time, TV commercials on our local station, newspaper ads and campaign during special events — using direct mail coupons. An easy-to-navigate website, coupled with a responsive and constantly updated social media page, and even a phonebook listing for the folks with time and money who grew up without Google all play an important part.”

Tim Barker pinpoints “7 Ways The Industry Has Changed In 2017.” Donald Trump’s election may have launched the wave of change that washed over the industry this year, but there’s more to it — as readers will see. Richard Sprague of Sprague’s Sports in Yuma, Ariz., offers, “There’s going to be some attrition, but those of us strong enough to weather it will be better for it.”

Dealers will find their next best seller in Part I of the 2018 New Product Showcase, with over 60 companies’ new-for-2018 products featured. The multitude of must-haves will not only ensure steady foot traffic, but are a great way to get a head start on first quarter sales.

Additional highlights of the December issue include what’s new and in store for SHOT Show 2018, NASGW President Kenyon Gleason surveys the two-step distribution channel and how it fits into today’s evolving shooting sports marketplace, and this month’s “Outdoor Marketplace” explains why banking on gift cards may prove lucrative this holiday season.