BESSEMER, Ala. (Aug. 7, 2017) — (ArmsVault.com) – Designed in 1977 and introduced the following year, the legendary short-stroke, gas-piston-operated Steyr AUG was immediately adopted as the standard battle rifle of the Austrian Army under the StG.77 (Sturmgewehr 77) name. To commemorate the 40th anniversary of the AUG, Steyr Arms has gone retro with the introduction of the STG 77 SA rifle, a limited-edition version that emulates the look, feel and operation of the original AUG. 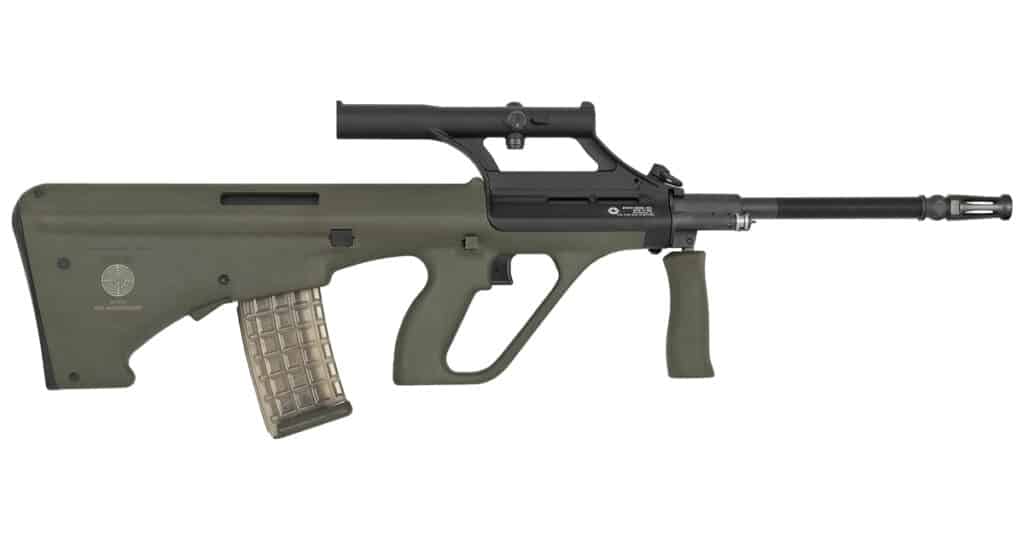 The STG 77 is the first U.S.-built production AUG variant to come standard with a 20-inch barrel. The barrels are cold-hammer forged and profiled to the original 1977 specifications, and at the muzzle is a tulip-style brake with the original “hex” check nut. But the most noticeable feature of the STG 77 is the sleek, integrated, original-profile 1.5X scope, which has been much sought after by AUG purists in the U.S. This optic is extremely clear, sharp and bright, despite its smaller diameter. The scope features the popular circle-dot reticle, but unlike the original optic that required a special tool to adjust the windage and elevation, the STG 77 reticle can be adjusted with a coin. Integrated to the top of the scope housing is a set of three-dot post-and-notch backup sights.

In order to replicate the original AUG as closely as possible, Steyr designed the STG 77 without any rails; however, the scope can be removed and replaced with any of the five standard Steyr Picatinny rails currently available for the AUG A3 M1. The hard-anodized aluminum receiver is smooth on the right side, and on the left side is an A1 charging handle, complete with the forward-assist button at its top rear. Much like the original AUG that lacked the bolt release now standard on current versions, the STG 77 charging handle is used to overcome the internal bolt hold open on the A1 trigger pack.

Also in keeping with the original color scheme, the STG 77 features OD Green furniture with a stock that accepts Steyr’s proprietary translucent magazines. The Steyr “bullseye” logo is laser engraved on the right side of the stock along with “STG77 40th Anniversary.” One AUG 30-round magazine with a matching OD Green floorplate is included with each rifle. The few internal improvements that have been made to the AUG over the last 40 years, such as the upgraded firing pin parts, are included in the STG 77. The rifle also features a QD sling swivel on the front of the receiver, whereas the original sling swivel was pinned in place.

The first batch of the 40th Anniversary STG 77 rifles has already shipped to dealers and distributors, and Steyr is limiting rifle production only through the remainder of 2017. The suggested retail of the STG 77 SA is $2,625.

Established in Steyr, Austria, in 1864, Steyr Mannlicher, GmbH, is one of the world’s oldest and most prestigious firearms manufacturers. Steyr’s comprehensive lines of premium hunting rifles and precision sporting and tactical firearms are technically mature, and their subtle elegance also communicates the harmony between appearance and substance. Steyr’s legendary SBS actions and cold-hammer-forged barrels are distinctive and unparalleled. Steyr Arms is the subsidiary headquarters of Steyr Mannlicher in the U.S. For more information, contact Steyr Arms at 2530 Morgan Rd., Bessemer, AL 35022; call (205) 417-8644; or visit www.steyrarms.com.