Dave “DB” Benton will be signing photos at Booth #1856 and raffling off autographed 13 Hours books and movies. In addition, Vertx® will be holding the Ultimate Vertx Gear Giveaway worth over $1,200 at the booth.

Cincinnati, Ohio (April 2017) – (ArmsVault.com) – Vertx, a leader in low-profile apparel and gear for the prepared professional, is proud to announce that Benghazi hero Dave “DB” Benton will be in attendance at the Vertx booth #1856 during the 2017 NRA Annual Meetings & Exhibits  in Atlanta, Georgia. Benton will appear Friday, April 28, between 4 p.m. and 6 p.m., as well as Saturday, April 29, between 10 a.m. and 2 p.m. Benton is one of four heroes from Benghazi and was represented in both the 13 Hours book and movie. He will be signing photos at the booth and Vertx will be raffling off one autographed 13 Hours book and movie every day of the show. 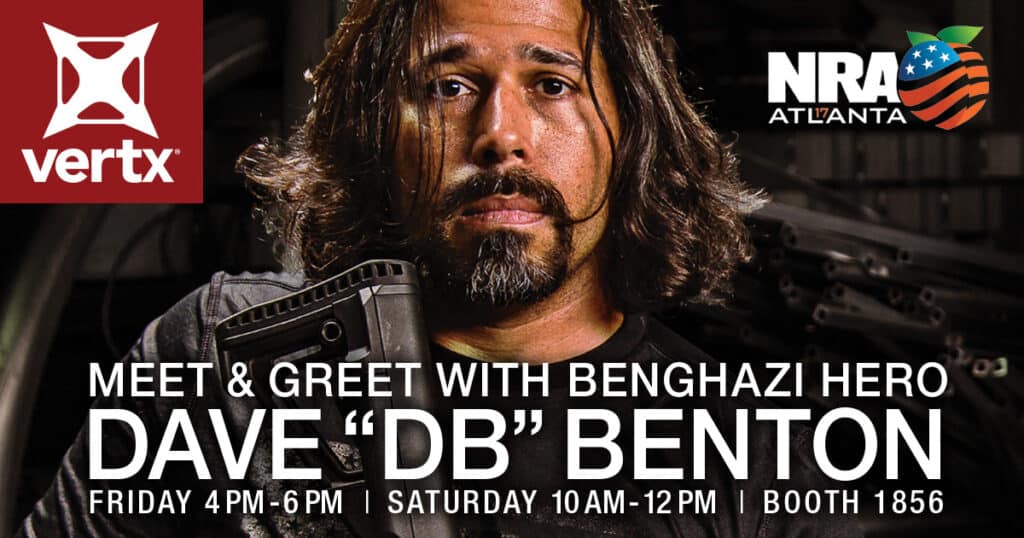 Additionally, Vertx will be holding the Ultimate Vertx Gear Giveaway in honor of the 2017 NRA Annual Meetings & Exhibits. One lucky winner will be outfitted with a full setup of Vertx gear worth over $1,200. In addition to entering online, NRA attendees are encouraged to visit Vertx at Booth #1856 for a chance to receive five entries into the giveaway.

The Ultimate Vertx Gear Giveaway is open only to U.S. citizens, or lawful permanent U.S. residents who are legal residents of 50 United States and the District of Columbia age 18 or older (or age of majority under applicable law). There is no purchase necessary to enter, participate or win and a purchase will not improve the odds of winning. All federal, state and local taxes associated with the receipt of the prize are the sole responsibility of the contest winner. To register for the giveaway online, please visit https://vertx.wufoo.com/forms/s1czmm751d6z80j/.

Vertx is a premier tactical and outdoor brand for the modern day prepared professional. Vertx designs world-class apparel, bags and packs that are created by best-in-class designers to combine a low visual profile with superior functionality. Since its inception in 2009, Vertx has earned trust among the nation’s top operators for exceptional performance, fit and durability. Vertx is a brand of Fechheimer, a Berkshire Hathaway Company. For more information, visit www.vertx.com.