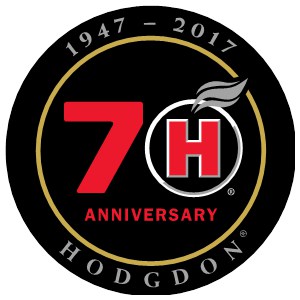 (ArmsVault.com) – Hodgdon, The Brand That’s True®, is pleased to recognize 2017 as the 70th Anniversary for the Hodgdon brand.

In 1947, Bruce and Amy Hodgdon, along with sons JB and Bob, launched Hodgdon, with the first surplus powder offering after World War II. Over the last 70 years, Hodgdon Powder Company has grown into the preeminent supplier of gunpowder and blackpowder to handloading and muzzleloading enthusiasts. Along the way, Hodgdon Powder Company has also acquired the IMR® and Goex® brands, as well as licensing the Winchester® Smokeless Propellants brand.

“Our father Bruce was drafted into the service during World War II, where he served as an aerial gunnery instructor for the Navy,” said JB Hodgdon, Hodgdon co-founder. “He used skeet to teach his students about the lead required to hit targets. He couldn’t get enough ammunition to teach skeet but could get components, so brother Bob and I would help him most nights loading shotshells so he could teach class the next day.”

“After the war, Dad was instrumental in convincing the government to sell him surplus 4895 and he brought it to market in 1947 as Hodgdon H4895,” said Bob Hodgdon, Hodgdon co-founder. “Our first ad selling surplus powder appeared in American Rifleman magazine in November, 1947. Although we’ve grown over the last 70 years and our company has a lot of accomplishments to celebrate, in our hearts, we’re still a group of proud handloading shooters and hunters from Kansas. We are grateful to our employees who manufacture, package and ship the product and for our handloading and muzzleloading customers who appreciate what we do.”

At a recent company celebration, Hodgdon employees presented JB and Bob Hodgdon with replicas of Hodgdon signage to commemorate the 70th Anniversary.

Established in 1947 by Bruce and Amy Hodgdon, today, sons J.B. and Bob have grown Hodgdon Powder Company into the largest US supplier of smokeless, blackpowder and blackpowder substitute propellants. The company distributes gunpowder under the Hodgdon®, IMR®, Winchester®, Pyrodex®, Triple Seven®, Goex® and VihtaVuori® brands.

Learn more about the brands at these websites – www.Hodgdon.com, www.IMRPowder.com, www.WWPowder.com or www.GoexPowder.com and connect with the Hodgdon brand on Facebook or YouTube.