(ArmsVault.com) – The new Kimber Micro 9, a 1911 built for close-quarter encounters, is the cover feature for the February issue of GUNS Magazine. John Taffin relates his unique journey with Ruger’s M77 Hawkeye in .308 in the wake of self-imposed limitations. Additional highlights in this issue include John Barsness’ commentary on synthetic versus walnut stocks, and the competition heated up when Will Dabbs, MD matched the modern AirForce Texan against the classic Kentucky Long Rifle. 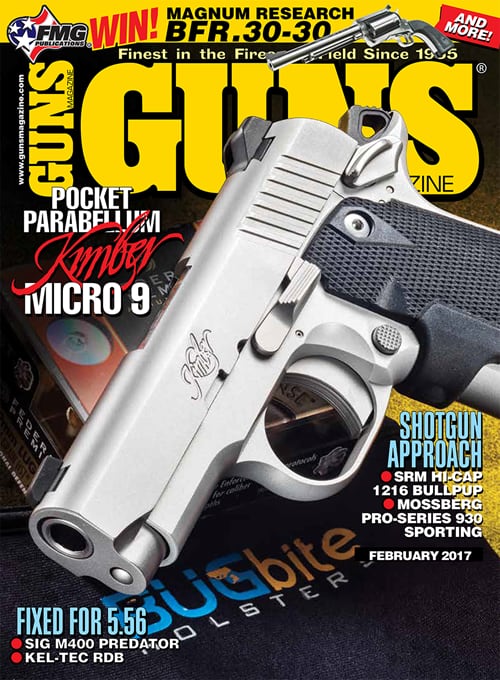 “My first shot with the Micro 9 at 7 yards hit the tiny red center of a 2-inch Birchwood Casey ‘Shoot-N-C’ aiming dot. ‘We’re off to a good start, I thought,’” reflects Massad Ayoob. The Mini 1911 was run through a typical “new toy” gauntlet that consisted of target shooting, reloading, holstering and receiving feedback from several experienced shooters. All of these produced encouraging results for this concealed-carry handgun. Readers will get detailed results in the February issue.

After experiencing a traumatic medical event, John Taffin used his years of experience, guided by his passion for the sport, to adjust and manipulate his shooting equipment to prevent further physical damage. He shares his journey from recovery to satisfaction in “Block That Kick!”

“As I watched several of my friends shoot their .308’s, I wanted to do the same, however, I just didn’t think it was a good idea,” Taffin confesses following his near-death episode. Moving forward, he set out to make shooting as pleasant as possible with the M77 Hawkeye Varmint Hunter from Ruger.

Also inside the issue, “Tool vs. Elegance” is John Barsness’ consideration of whether guns should be regarded as tools — like hammers or lawn mowers — or if some elegance and even embellishment is appropriate. The Taurus 24/7 Gen 2 Compact in .40 S&W gets a thorough workout from Mike Cumpston and if literary comfort is what you seek, John Connor suggests titles that sustained him through the winter such as, A Soldier’s Tale–Three Nineteenth Century Stories of Life at War.

Manufactured entirely in the U.S., the Magnum Research BFR .30-30 Winchester is the crown jewel of February’s GUNS giveaway. Included with the BFR is a 110 Folding Hunter from Buck Knives, Colt Mini Replica Revolver and an engraved 2nd Amendment belt buckle. The combined value of this exceptional set totals $1,318.90. Readers are invited to enter the drawing for free by visiting www.gunsmagazine.com/giveaway.

As with every issue of GUNS, links to online-only extras provide readers with even more from seasoned enthusiasts. Publisher Roy Huntington lends his advice in this month’s online feature, “Tactical Travel Tips,” so you won’t become a “volunteer victim on the road.” The February issue is available now on newsstands. Readers can also purchase a digital version of the GUNS February issue at www.gunsmagazine.com/digital-version.