GENESEO, IL, November 1, 2016 – (ArmsVault.com) – Springfield Armory® is pleased to announce the SAINT™. Built to equip those who wake up every day determined to protect what they have, believe that safety is their responsibility, and are unapologetic and uncompromising about defending their legacy, the SAINT™ is what an AR-15 should be.

While equally at home on plinking and competition ranges, the SAINT™ is built for defense and packs features valued by warriors into a carbine with a price point at a fraction of what one would expect. With an MSRP of just $899, the SAINT™ brings affordable reliability to the market. 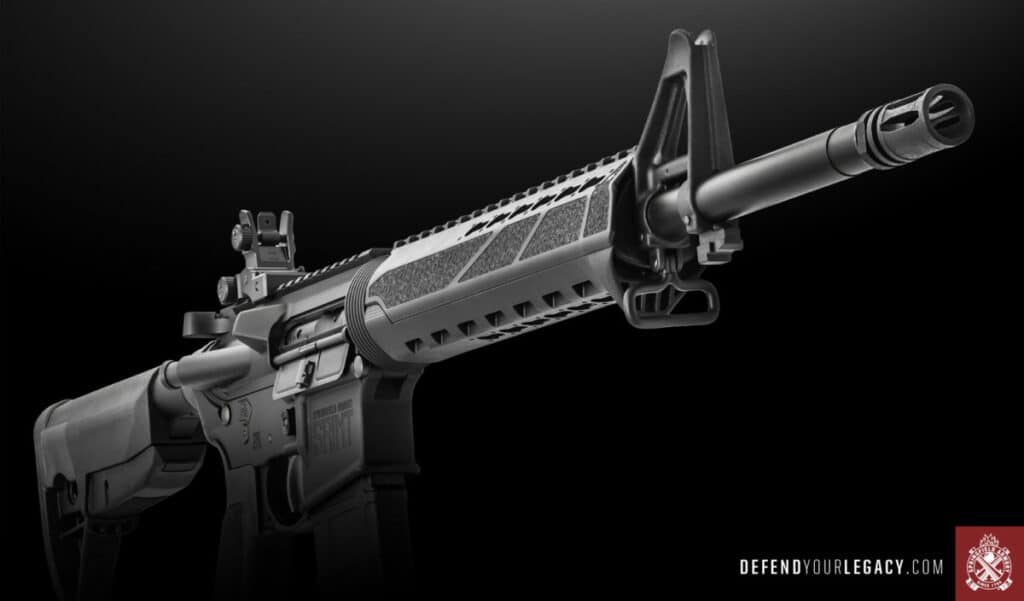 “Throughout our company’s history, we’ve been aggressive about launching new products to give our customers the best tools possible,” states Springfield Armory® CEO Dennis Reese. “Back in 1985, we moved into the 1911 business because we felt that customers deserved more than the market was currently offering. Again in 2001, we decided to invest in the XD family of personal defense guns to serve an unfilled market need for personal defense. Now, we’re offering a defensive rifle built the way an AR-15 should be.”

All trigger components are micro-polished and treated with Nickel Boron. The result is a mil-spec weight trigger that operates smoothly and with no detectable grit. The SAINT™ includes a mid-length gas system paired with an “H” style heavy tungsten buffer designed to mitigate jerky recoil impulses and enable fast and accurate follow-up shots.

While optics ready, the SAINT™ includes a flip-up rear sight to pair with the fixed front sight equipped with an elevation-adjustable post. The dual aperture rear sight features ½ minute of angle windage adjustments.

Created for the free and independent, Springfield Armory®’s SAINT™ represents the next generation of America’s personal defense rifle. Built with relentless dedication to reliability, it’s made to support the awesome responsibility that comes with defending one’s legacy.

“The First Name in American Firearms,” Springfield Armory® was founded in 1777, when George Washington ordered the creation of an armory to store ammunition and gun carriages during the American Revolution. In 1794, the armory began to manufacture muskets and spent the next 150 years supplying firearms for every major American conflict. The original armory closed in 1968. In 1974, the Reese family took ownership of the Springfield Armory® name and began making the M1A™ rifle. Today, Springfield Armory® develops many products loyal to the company’s heritage, like the 1911 pistol, while ensuring its future with innovative products, including the XD®, XD® Mod.2®, XD(M)® and XD-S® polymer pistols.