Fountain Valley, CA — (ArmsVault.com) – SureFire, LLC, manufacturer of the world’s finest—and most innovative—illumination tools and tactical products, will be a featured exhibitor at the 2016 Modern Day Marine show, held September 27th – 29th at Marine Corps Base Quantico, VA. MCB Quantico is home to both Marine Corps Systems Command and the Combat Development Command and is responsible for developing equipment and systems which Marines depend upon. SureFire will be showing an extensive line of weapon-mounted lights, hand-held lights, and hands-free illumination tools. Visitors are encouraged to stop by the SureFire booth (#3027) for hats, stickers, and other free SureFire swag! 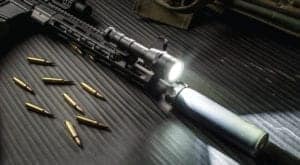 About SureFire — Located in Fountain Valley, California, SureFire, LLC is the leading manufacturer of suppressors, high-performance flashlights, weapon-mounted lights, and other tactical equipment for those who go in harm’s way, or anyone who demands the ultimate in quality, innovation, and performance. SureFire illumination tools are used by more SWAT teams and elite special operations forces than any other brand. SureFire is an ISO 9001:2008-certified company.