Camp Perry, Ohio (September 2016) – (ArmsVault.com) – With a score of 200-16X, U.S. Palma Champion, Norman Crawford won the 2016 Wimbledon Cup during the National Long Range Rifle Championships using a 32″ PROOF Research carbon-fiber composite barrel chambered in .284 Shehane. This prestigious cup, which dates back to 1875, is awarded annually to the winner of a 1,000-yard shooting competition consisting of 20 timed shots, fired from the prone position. Crawford’s win represents the first time in the cup’s 141-year history that it has been won with anything other than a steel barrel. 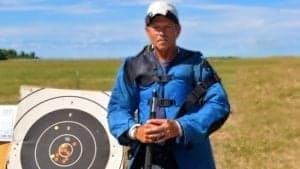 “I don’t know of anyone else in this sport using a carbon fiber barrel,” said Crawford, who’s been shooting PROOF composite barrels since 2013. “The benefits over a steel barrel are that you get a larger-diameter, stiffer, faster-cooling barrel that weighs less than a standard medium Palma-taper barrel, with no real downside I’ve been able to identify in three years of shooting them. All five PROOF barrels I own are capable of winning any match-providing I do my part.”

A 30-year Army vet and former Army Special Operations Sniper, Crawford has been shooting competitively since 1990. His list of shooting accomplishments is long, including winning the Camp Perry National Matches-considered the “World Series of the Shooting Sports”-in 2005 and earning runner-up in 2001 and 2003. A three-time member of the U.S. Rifle Team to the World Championships, Crawford also used a PROOF barrel to tie the national record for a 600-yard Any Gun, Any Sight competition in North Carolina last November, one of five national records he has set or tied over the course of his shooting career.

According to PROOF Research CEO Larry Murphy, “We are honored that Norm chose our barrel to go up against the best shooters in the world with. His success in Palma shooting has been unparalleled and we are proud to be a part of it-and by putting our barrels to the test in intense competition, he pushes us to do our best as well.”

PROOF Research is a science-driven defense/aerospace company based in Montana and committed to developing next-generation materials, barrels, lightweight hunting rifles, and weapon systems that lighten warfighter load while improving performance and effectiveness. PROOF Research’s goal is to make reduced weight, unsurpassed durability and match-grade accuracy a reality for all its customers. www.proofresearch.com