Bergara B14 Hunter Bolt-Action Rifle Wins Rifle of the Year

The Bergara B14 bolt-action rifle, distributed exclusively in the UK by RUAG AMMOTECH UK, and introduced in 2015, has received rave reviews from writers, retailers and sportsmen

Lawrenceville, Ga. (August 2016) – (ArmsVault.com) – The Bergara B14 Hunter bolt-action rifle recently won the U.K.’s prestigious “Rifle of the Year” award during the 21st annual U.K. Shooting Industry awards. Distributed exclusively by RUAG AMMOTEC UK, since 2015 in the United Kingdom, the B14 rifle, with its unmatched accuracy and superior level of craftsmanship, has won the hearts of the British hunting media, as well as the sporting public and retailers.

The award is sponsored by U.K.’s top sporting publications, “Shooting Gazette”, “Sporting Gun”, “Shooting Times”, and Shootinguk.co.uk, who are all part of Time Inc.’s annual Shooting Industry Awards. The judging panel consisted of the publications’ editors and experts in the fields of hunting, gunsmithing and game keeping.

“The quality and accuracy of Bergara barrels are known world-wide by hunters, military, and law enforcement professionals alike,” Ben Fleming, President of Bergara USA said. “The introduction of the Bergara B14 into the global market has been extremely successful. With such a positive reception of the B14 rifle platform here in the USA, as well as with our European partners, it offers a wonderful confirmation that shooters everywhere are seeing and feeling the quality and craftsmanship that goes into each and every rifle we build.” 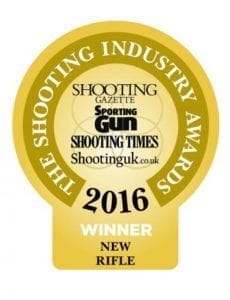 The Bergara B-14 Hunter combines legendary Bergara barrel accuracy with a super-smooth B-14 Action and a Bergara curved trigger for a crisp, clean pull, guaranteed every time. When molding the glass fiber reinforced polymer stock, solid steel pillars are inserted and permanently molded into place to provide a highly stable bedding surface for the barreled action.

In the United States, the Bergara B-14 rifle introduction continues to be met with great success. In time for hunting season, the B-14 Hunter is available now at retailers across the country.

As of this month, RUAG AMMOTECH is introducing the Bergara B-14 Varmint in .308 Win with a blued, threaded barrel, black synthetic stock and choice of floorplate or detachable box magazine to their U.K. retailers.