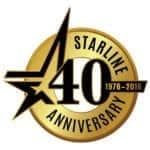 SEDALIA, MO – (ArmsVault.com) – Starline recently announced they will be donating $8,700 to America’s Mighty Warriors, an organization whose mission is to honor the sacrifices of our troops, the fallen and their families by providing programs that improve quality of life, resiliency and recovery.

Starline recently concluded an online promotion that gave away a prize pack that included a Hornady Lock-N-Load AP Reloading Press, 1,000 Berry’s plated handgun bullets, 1,000 Starline handgun cases and Berry’s ammo boxes. To continue their support for our United States military service men and women, Starline committed to donate $1 to America’s Mighty Warriors for every person that entered the contest.

“We’re very proud to support our country and the men and women who serve to protect it,” said Robert Hayden, Jr., Vice President of Starline Brass. “We appreciate our partners in this promotion, Hornady and Berry’s Manufacturing, and we admire Debbie Lee’s hard work and dedication to supporting our troops and their families through the America’s Mighty Warrior organization.”

Starline is a family owned business that prides itself on producing the highest quality brass cases available. For more than 40 years, Starline’s unique manufacturing process and commitment to their team of employees has distinguished Starline from the competition.

To see all the products Starline offers and to order factory direct online, visit www.starlinebrass.com. Stay up to date with new calibers, exciting promotions and other great content by signing up for an account to receive email notifications.