Newington, NH (July 12, 2016) – (ArmsVault.com) – SIG SAUER, Inc., is pleased to announce that Team SIG member, Mason Lane, has won the 2016 Massachusetts State International Defensive Pistol Association (IDPA) competition. The event was held at the Woburn Sportsman’s Association in Bedford, Massachusetts, and featured over 150 shooters from the New England area. The Massachusetts State IDPA is one of the oldest sanctioned shooting events in the country and is considered to be the first leg of the triple crown of competitive shooting in New England. 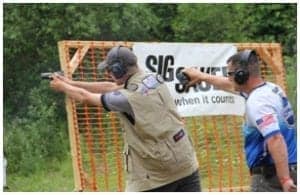 Lane, shooting in the Enhanced Service Pistol Division, was crowned overall champion after he posted the lowest combined time of 181.84. The match consisted of ten shooting stages, including two low-light stages. Shooters were required to engage multiple targets from various shooting positions during each stage of fire. The total score was based upon the time it took each competitor to shoot the match. Time was added to a shooter’s score for hits outside the zero area of the target, missing the target completely or hitting a non-threat target.

An experienced IDPA competitor, Lane has been an active participant for the last four years and has been on Team SIG for nearly two years. During this year’s match, Lane elected to use a SIG SAUER P320 9mm pistol, which helped him secure a top place finish.

“This was a very technical, challenging match, with smaller targets, longer shots, and reduced shooting areas,” said Lane. “That combination was very grueling, but I still had a great time and was very pleased with my performance and that of the P320. The general idea of IDPA competitions is for the equipment to play a lesser role, but in reality, accuracy and reliability are very important, especially in matches like this.”

IDPA matches are designed to simulate self-defense scenarios and real life encounters. While the majority of matches are geared towards the average shooter, each stage of fire can be extremely challenging, even for the most ardent competitor. IDPA matches are designed to test the skill and ability of each individual. In order to maintain an even playing field, shooters are separated into classes based on their performance level.

For more information, please visit us at – www.sigsauer.com.

SIG SAUER, Inc. is a New Hampshire-based weapon systems provider leading the industry in American innovation, ingenuity, and manufacturing. SIG SAUER® brings a dedication to superior quality, ultimate reliability, and unmatched performance that has made it the brand of choice among responsible citizens, and many of the world’s most elite military, government, and law enforcement units. As the complete system provider™, SIG SAUER offers a full array of products to meet any mission parameter, from handguns and rifles to silencers, optics, ammunition, accessories, and ASP (Advanced Sport Pellet) airguns. The largest member of a worldwide business group of firearms manufacturers that includes SIG SAUER GmbH & Co. KG in Germany and Swiss Arms AG in Switzerland, SIG SAUER is an ISO 9001: 2008 certified company with more than 1,300 employees. For more information on SIG SAUER, any of its products, or the SIG SAUER AcademySM, log on to www.sigsauer.com.