(ArmsVault.com) – American Handgunner, the first publication devoted exclusively for handgun enthusiasts, turns 40 with the September/October 2016 issue. “Yup, this Sept/Oct 2016 issue … celebrates our 40th anniversary. That first issue, Sept. 1976, re-wrote the book on gun magazines and has spawned copycats galore over the years,” says American Handgunner Editor Roy Huntington in his Insider column. Roy continues with a salute to Handgunner’s audience: “We’re still number one in the quality of our readers and the affection of the industry. You guys are handgunners and love to shoot, reload, compete, collect, train, defend and you all cherish your families, your friends and your country. So do we.” 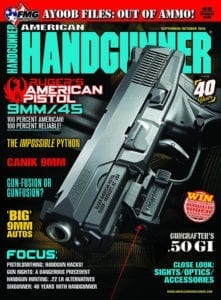 In this issue’s cover story, “The Ruger American Pistol: 100 Percent American-Made, 100 Percent Reliable,” Mark Kakkuri thinks Ruger’s tagline for the new pistol — “Anything else would be un-American” — is a challenge for law enforcement as well as ordinary citizens to “buy American or go home.” The desire to patronize American products certainly is a good reason to buy the handgun but aside from this, Kakkuri says the Ruger American has many other attributes. After testing the lightweight, duty-sized, polymer-framed pistol, Kakkuri finds it performed perfectly with “100 percent reliable shooting with accuracy to match.”

In an American Handgunner exclusive “The Impossible Python,” Roy Huntington writes about a “last-ever” factory Colt Python. Originally designed in 1955 as some sort of “supergrade” revolver, the Python became very popular until Colt stopped its production in 1999. The Colt Custom Shop still produced them though in limited quantities until around 2005. What makes this last Python “impossible” was it was built in 2014 — and Roy informs readers how this came about.

Other highlights inside this issue of American Handgunner include Aimee Grant’s review of seven must-have accessories, how the .50 GI is alive and well, the innovative features of the Canik TP-9’s ISO-9000-rated design and Robar’s TST and JCP 1911 Pistols. Readers will also get a Handgunner “Close Look” at sights and optics, with six options to “keep your peepers happy.”

The Rough Rider RR22MB4 from Heritage Mfg. is the main prize in the Sept/Oct 2016 giveaway. The small-bore revolver comes with a Rosewood Lockback Knife from Bear & Son Cutlery, a Razor Series folding muff from GSM and an MTM handgun case from Case-Gard. Enter the giveaway for free at www.americanhandgunner.com/giveaway.