Fullerton, CA – July 6, 2016 – (ArmsVault.com) – Applied Ballistics Munitions has announced the release of their 300 Winchester Magnum 215gr Hybrid Target Mission Ready round. This round is loaded with the Berger 30 Caliber 215gr Hybrid Target bullet for maximum BC. The hybrid ogive profile of this bullet was developed by their Chief Ballistician, Bryan Litz. This unique ogive profile combines the streamlined design of a secant ogive with a traditional tangent ogive. The 215gr is an exciting design, as it allows them to load a high BC bullet into factory ammunition that shoots well out of various rifle platforms with a 1:9” twist rate or faster. 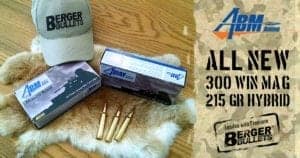 In preparation for the release of this round, ABM Ammo partnered with LongRangeOnly.com for extensive field testing.

“What can I say bad about this ammo? It’s passed every one of the tests above my expectations,” says Long Range Only Editor, Jeff Brozovich.

Jeff did the initial testing and got some great results from this ammunition. He took this round through the gauntlet of testing by weighing it, measuring it, and he also did some short range and long range shooting with it. He is a seasoned handloader and while measuring the seating depth of this loaded ammunition he stated he was very impressed and it was “as close as I could probably load them.”

To find out more about this round and see Jeff’s full review visit: http://www.buyabmammo.com/ABM-launches-300-Winchester-Magnum-215gr-Hybrid-Target-Mission-Ready-Round_b_15.html

In 2011, Bryan created Applied Ballistics Munitions to fill a growing need for quality ammunition in the target competition and sniper community. ABM quickly became known within the long range shooting world as the best ammunition available in the market. Excited about the possibilities of creating ammunition that could fill needs in the hunting community as well, Berger Bullets purchased ABM from Bryan in 2013 on the condition that he would continue his work in research, development, and testing of all their ammo. To find out more about ABM Ammo, visit www.abmammo.com.

Built in the lab. Proven in the field.