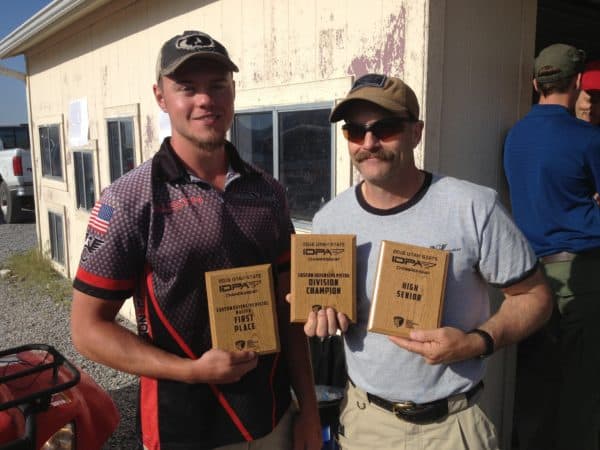 Whether it be genetics, a strict training program, or just plain skill, what the Proulx’s are doing to prepare for matches is working quite well for them. Both have won or ranked highly at nearly every match they’ve entered this season.

If you’re involved in IDPA, you’ve heard about the young shooting sensation, Austin Proulx. His mastery of the custom .45ACP 1911 is no secret amongst those who have to shoot against him. The youngest member of Wilson Combat’s shooting team, Austin has racked up a lot of wins in a short period of time. This match was no different with his first place finish in Master Classification of the Custom Defensive Pistol division.

Walt, Austin’s father, went on to take top honors in the Custom Defensive Pistol division and also secured the High Senior award for his masterful handling of his Wilson Combat CQB.

When asked about his victory, Walt responded “This was a challenging match and I’m happy with the way I shot. I’d like to thank Wilson Combat for supporting me and my addiction to the shooting sports. My gun ran flawlessly and helped me notch another Division Championship and High Senior award. It is getting tougher and tougher to beat my son but I still manage to do it on occasion. Life is good!”

If you’re shooting an IDPA match with these two fine competitors, know that you’ve got your work cut out for you. The Proulx men are known for putting up stiff competition wherever they go.

Since 1977 Wilson Combat has been the leading innovator in high-performance, custom 1911 handguns, tactical long guns and accessories. A Wilson Combat product’s unmatched level of exceptional reliability and peerless craftsmanship is only equaled by our legendary customer service. Learn more about us at http://www.wilsoncombat.com.