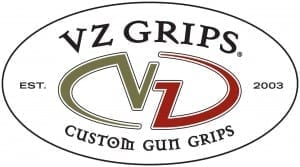 VZ Grips® to Showcase New Products and teams up with SLR Rifleworks at NRA Annual Meetings and Exhibits, May 19-22, 2016.

May 18th, 2016: (ArmsVault.com) – VZ Grips® the original innovator (and authority) for custom gun grips is proud to announce that they will be showcasing their gun grips, knife grips, and Key-Mod grip panels at the NRA annual meetings and exhibits, May 19th-22nd at the Kentucky Exposition Center in Louisville, KY. VZ Grips has also teamed up with innovative accessories manufacturer SLR Rifleworks. SLR will be on site all weekend at the VZ booth with multiple samplings of their product offerings. From their brand new Helix handguard, to everything in between, you are sure to find that SLR has the competition beat.

“Build it right the first time” giveaway. All NRA show attendees are also encouraged to stop by VZ Grips’ booth (#5947) to enter into the “Build it right the first time” giveaway. Every participant will have the chance to win a grand prize bundle pack (one winner per day) from companies like: SLR Rifleworks, LALO Tactical, Breakthrough Clean, S3F Solutions, VLTOR Weapons Systems, Alex & Ryan Design holsters and VZ Grips. Be sure to stay tuned to VZ Grips’ facebook and instagram accounts for updates.

NRA Show Party : VZ Grips will also be co-hosting the NRA Show party with James Yeager of Tactical Response. Entertainment will be provided by the Defiant Damsels and complimentary food and drink will be provided. Location and time are below:

About VZ Grips: VZ Grips was started in 2003 by John VanZyk in hopes of creating the perfect aftermarket compliment for production pistols. He started designing & manufacturing textured grip solutions that would aid the shooter in proper grip and form. John (being an avid competitive shooter) used Intel gained from competing in countless matches, and researching fellow shooters demand for a “Better Grip”. VZ now offers various different grip options for guns like the 1911, Sig Sauer, Beretta, CZ pistols all the way to S&W revolvers. VZ’s OEM work has also allowed them to bring the customer this option straight out of the box. Their clients include Springfield Armory, Remington, Beretta, Para Ordnance, Dan Wesson, Wilson Combat, Nighthawk Customs, and even Strider Knives. VZ Grips prides themselves on the quality of their products, and the fact that they are MADE IN THE U.S.A. THE VZ WAY.