(ArmsVault.com) – Brimming with more than 36 articles on vintage, replica and classic guns, the much-anticipated GUNS Surplus 2016 Special Edition promises to grip both the gun enthusiast and historian alike. From the post war birth of the AK-47 to a 30-year veteran of the US military: Beretta’s M9, this issue covers an array of historical narratives on some of the world’s most legendary military firearms and classic guns. 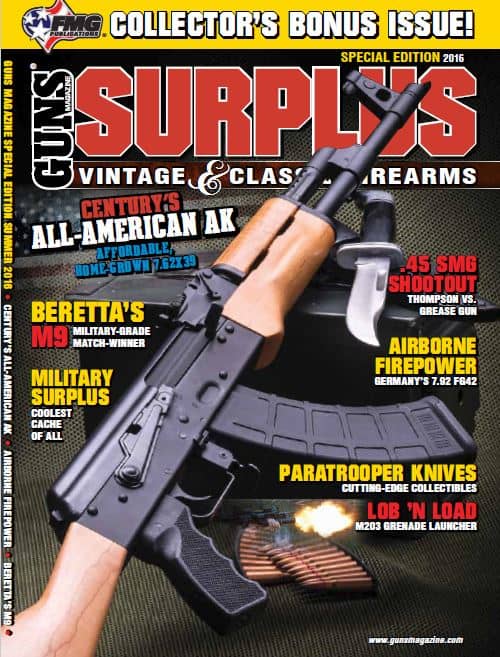 “The RAS47 is entirely new and American made –– from the buttplate to the muzzlebrake. Americans milled and pressed the parts, Americans cut the wood for the furniture from American forests, and corn-fed Americans put everything together,” Dabbs writes. “What this offers American shooters is a truly brand new Kalashnikov rifle whose metallurgy and workmanship are beyond reproach.”

In “Battle Tested,” Contributing Editor Robert Kolesar surveys Beretta’s 9mm M9’s role as a service pistol, spanning its initial adoption into the US military to the redesigned models of today.

“The M9 –– hated by some and liked by others –– is approaching four decades of military service. It’s had a few teething problems, long since resolved. It’s accurate, low recoiling, very reliable, easy to shoot well and a proven combat veteran. With more than a half-million serving, it’s a sure bet the M9 will see a fifth decade or more of military duty.”

Other highlights in this Special Edition include “Guns Of The Plains Indians,” an insightful piece by Mike “Duke” Venturino on how “battlefield archaeology has given modern historians” evidence of the weapons used in the Plains Indian Wars, while Managing Editor Payton Miller pulls back the “Iron Curtain” on the provenance of a vintage Russian SKS carbine in “Breaking The Seal.”