ACCOKEEK, Md. (March 25, 2016) – (ArmsVault.com) – Team Stoeger 3-Gun competitors opened the 2016 season with impressive showings in a pair of events. Paired with their Stoeger M3K 3-Gun shotguns designed specifically to meet the needs of competitive shooters in this growing sport, Team Stoeger saw one of its rising 3-Gun stars qualify for this year’s 3GN Championship and three teammates finish in the Top 3 of their division. 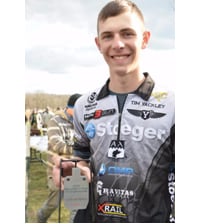 At 17 years old, Tim Yackley is no stranger to being one of the youngest competitors wherever he goes. In the recent 3-Gun Nation Pro Series event at the Virginia International Raceway in Alton, Va., Yackley was one of two competitors to earn a spot in the 3-Gun Nation Championship this October. Facing veteran competitors and former champions in the field, Yackley handled the pressure of the event and survived a pair of 3GN eliminator stages to securing the second of two championship slots up for grabs during the event.

“I put in the practice and it paid off. Understanding the pace I needed to keep and the style of the stages was important to doing well,” Yackley said. “I am looking forward to practicing for the next six months for the shoot off in October.”

“The first match of the year is always the hardest for me and the tough conditions didn’t make it any easier,” Muller said. “I have a secret about my new Stoeger M3K however: it’s the same M3K that I put almost 6,000 rounds on last year. Once again, my Stoeger worked as hard and I did, paving the way to a second-place finish.”

For the latest news and product information about Stoeger and its acclaimed M3K 3-Gun, go to www.stoegerindustries.com.