OCEANSIDE, Calif. – January 7, 2016 – (ArmsVault.com) – Industry Armament today announced the acquisition of Predator Tactical, a premier developer of custom firearms and training solutions for the military, law enforcement and civilian markets. Predator Tactical’s founder Matt Burkett, a world champion shooter, has joined the company in an advisory capacity and will focus on developing advanced weapon systems, including his renowned 1911 pistol platforms. Industry Armament plans to invest significant capital into expanding Predator Tactical’s current production and distribution operations in Scottsdale, Arizona, and will continue to offer the company’s top-selling products. The transaction is expected to close in the first quarter of 2016. The terms and conditions are not disclosed. 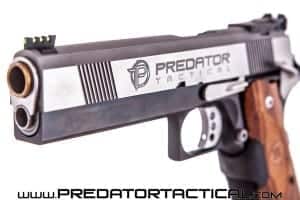 “The acquisition of such a respected firearms brand is a game changer for our company,” said Bryce Stirlen, president and CEO, Industry Armament. “As we develop weapon systems that are trusted from the home front to the battlefront, we now have the benefit of tapping into the incredible knowledge and technology base of Predator Tactical and Matt Burkett. Industry Armament remains committed to fulfilling all obligations of Predator Tactical, and providing service and support to existing customers. In the first quarter of 2016, we will focus on streamlining operations, improving quality control and clearing back orders. This includes investments in state-of-the-art equipment, materials and the overall expansion of the Arizona production facility, so we can capitalize on our growth and deliver significantly higher volume.”

Mr. Burkett founded Predator Tactical in 2010, and the company quickly attracted a loyal customer base with custom pistols and rifle systems that were designed for speed, safety and performance. Products such as the Wraith and Night Shrike garnered wide acclaim among civilian competition shooters and gun enthusiasts. Burkett is also one of the world’s premier firearms instructors. He has taught thousands of students in over 20 countries including the military special operations community, and federal, state and local law enforcement agencies.

“I’m thrilled to be working with Industry Armament to bring game-changing new products to the firearms industry,” said Matt Burkett, owner, Predator Tactical. “We have been working on numerous concepts and prototypes, and this acquisition will enable us to focus heavily on research and development, solidify custom firearm production lines and rapidly clear all back orders so we can continue to do what we’re passionate about – design guns that solve problems in innovative ways and provide the user with the ultimate shooting experience.”

Industry Armament will be debuting fully built weapon systems and tactical gear at booth #818 at SHOT Show 2016, taking place January 19-22 at the Sands Expo Center in Las Vegas. For more information, please visit us online at www.industryarmament.com and www.facebook.com/industryarmament.

Industry Armament is committed to advancing the art and science of weapon systems and tactical gear to give our customers the winning edge – whether their missions are on the beat or on the battlefield.  From technologically advanced rifle and pistol platforms to handcrafted nylon tactical gear, Industry Armament’s products are designed for the toughest missions in the military, law enforcement and civilian markets, and proudly made in the USA. For more information, visit Industry Armament on the web at www.industryarmament.com or www.facebook.com/industryarmament.