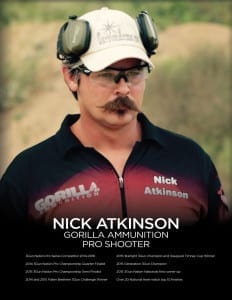 Gorilla Ammunition will host Nick at their 2016 SHOT Show booth to meet with fans and sign autographs. Nick will be in the booth on Wednesday January 20th from 2:00 PM to 4:00 PM. Gorilla Ammunition is located in booth 3727 at the SHOT Show at the Sands Convention Center in Las Vegas, NV.

“Gorilla Ammunition is proud of Nick’s performance last season. Nick has done a great job representing the Gorilla Ammunition brand. We want to utilize the SHOT Show as an opportunity to allow Nick to meet his fans and connect with the public. Nick is a not only a great shooter but a fun and energetic person and his passion for the shooting sports shows!” said Gorilla Ammunition’s Director of Sales & Marketing, Jay Duncan.

“I have been to SHOT a few times, but I was always the one collecting autographs. It is an exciting milestone in my career to be the one signing the autographs now.” said Nick Atkinson.