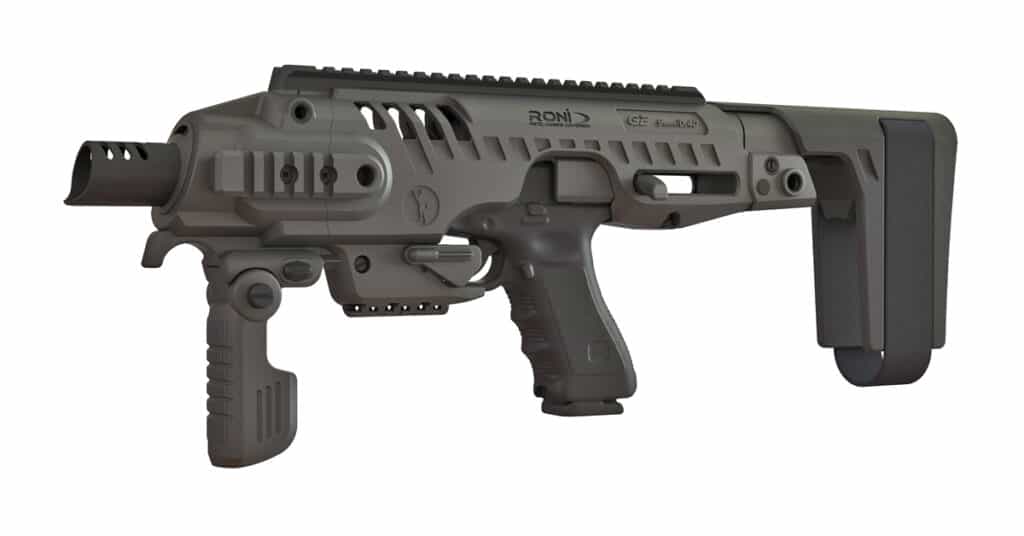 The Stabilizing Brace is adjustable and flexible with a hook and loop fastener for a custom fit for any user. The brace was originally designed for wounded warriors and others with a disability or otherwise incapable of securely holding a firearm. The STAB-RONI® is constructed from high quality elasto-polymers to exacting tolerances. Both models are designed for the GLOCK® 19/17 pistol.

The RONI® platform requires no pistol disassembly at all. Simply drop the pistol in the kit and it locks within seconds. Many of the features on RONI® are ambidextrous, including the trigger-guard safety, a super-fast cocking handle and right and left serrated thumb rests for better recoil control and muzzle rise. Additional features include a forward mounted extra magazine holder, integral forward flashlight mount, Picatinny rails for two sighting devices and additional side rails.

Both the Micro RONI® Stabilizer and the RONI® RECON Stabilizer are available in black. MSRP is $546.00 for the RECON and the Micro will be announced at a later date.

*The RONI® Stabilizer Brace is intended only to be used as designed as a forearm brace. The addition of a stock and/or forward grip to the RONI® RECON would convert it into a NFA controlled Short Barrel Rifle (SBR) and Any Other Weapon (AOW).

For more information on CAA visit, www.CAAGEARUP.com. Join the conversation on Facebook.