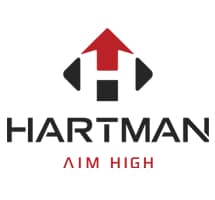 (ArmsVault.com) – In some companies, it is the marketing department that typically “develops” new products based upon voids found in customer research. Typically. But the firearms industry is not typical. Trends are not created to satisfy fashion needs or fill the latest technology vacuum. New products in the firearms industry are often created by users, whether they are on a shooting range wondering why a particular gun is not ringing steel or in the heat of combat when the “I could really use this right now” can mean the difference between life and death.

Sights are one of those product categories that unfortunately don’t often receive the attention they truly deserve from manufacturers. Often companies making guns or gear add sights to complement their brand with little thought to just how important a sight is to the user. It can make or break a competition, and it can save or lose a mission.

Mikey Hartman knows that full well. Growing up in southern California, most boys dream of surfing and girls. Mikey dreamed of joining the Israel Defense Forces and becoming a sniper. Through determination and focus, Mikey not only made it to Israel and joined the IDF at the impressionable age of 19, he quickly became Israel’s IDF shooting champion and as a young lieutenant in the IDF, he led the army’s marksmanship unit, and built the instructors course, as well as writing the entire IDF shooting doctrine. After two decades and some half a million IDF soldiers trained under his watchful eye, Mikey retired from the IDF as Lieutenant Colonel, but his passion for training soldiers and helping them improve their shooting skills didn’t go away, if anything it grew stronger. As a consultant to the military and to security groups worldwide, Mikey became an entrepreneur and started companies focused on bringing the latest battlefield technologies to warriors, law enforcement and citizens across the globe.

After implementing most of the shooting weapon systems into the IDF during his 22 year career, it’s safe to say Mikey knew a thing or two about sighting systems and just how critical they are to the success of any mission. Mikey put several years of research and development into a sighting system that would shake up the industry and perfect the many flaws he saw with the current sights on the market. Mikey tested his innovative sight under brutal conditions, adjusted, obsessed, readjusted and then retested it again and again, until finally he released his perfection, known as the Hartman MH1 Reflex Sight, out into the world. The MH1 sight is designed with the military, law enforcement, security personnel or the responsible civilian shooter in mind. It offers multiple firsts: one being the largest field of view through the sight and the only wireless remote-controlled sight on the market, another innovation is the ability for the operator to customize the MH1 in a variety of options and finally, a very important feature, the MH1 resolves one of the number one complaints with electronic gear – battery life.

“The MH1 is completely designed with the user in mind. Your ultimate goal in a combat situation is getting the job done and the MH1’s features are designed to make sure your mission succeeds and you stay alive,” Mikey explained. “Every feature is benefit oriented, from the large window that allows for extremely quick target acquisition, which we all know is critical during the stress of combat, to the wireless remote control that allows you to quickly adjust your sight without taking your eyes off the enemy or your hand off your rifle.”

“The optics are very important in a battle sight,” Mikey added. “Our MH1 reflex sight, with its intricate internal mechanical collimating system, has allowed our team to adjust the distance between the LED and the aspheric lens to produce near ‘0’ parallax, resulting in increased accuracy. The reticle always stays on target regardless of where the shooter’s eye location is in the large window.”

One of the options available with the MH1 is something Mikey calls the PTT strap. “The Push-To-Transmit wireless remote control strap is very unique and allows the operator to activate the sight and control the brightness levels of the reticle, all without disengaging his supporting arm from the weapon, reducing his reaction time and keeping focused on the threat.” 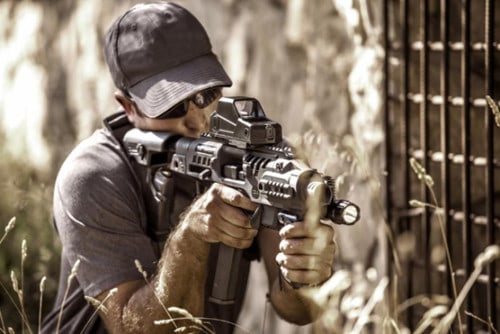 “One of the biggest complaints any sight user will tell you is that there is never enough battery power and you can’t get it when you need it,” Mikey said. “Not only is it mission critical to have power when you need it, it is just as important to preserve power when you don’t. The MH1 does the thinking for you. The MH1 sleep mode and dual 30 degree motion sensors only activate the sight when a shooting movement occurs, preserving battery life. Also, the sight charges using a USB rechargeable battery that can be plugged into any wall socket, computer or lighter. For back-up, the MH1 uses a single CR123 battery, just in case.”

“I have spent a majority of three decades training soldiers for combat and I feel I have a unique understanding of what the true shooter needs,” Mikey concluded. “The MH1 Reflex Sight is feature loaded, and every feature has a specific benefit to the operator. This sight will give the operator confidence, increase his overall accuracy, putting more rounds on target faster.” 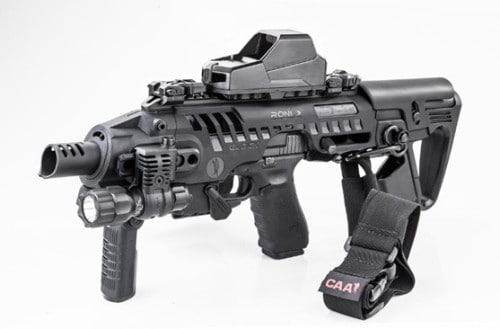 Having been developed from the mind-set of the user instead of an engineer, several features of the MH1 are specific to the user needs, such as the ability to customize the user interface. Many of the MH1’s features can be customized for various sleep mode activation time, reticle brightness levels, motion sensors and others. The MH1 sight rear panel is designed to allow user easy access to engage the activation buttons, even when a magnifier or NVD is mounted directly behind the sight. A first-of-it-kind accurate reticle design was created to add accuracy using balancing lines and a range distance estimator.

Hartman Ltd. is the latest company started by the industrious and legendary marksman that is Mikey Hartman and the MH1 is the first product to roll off the production line. The MH1 Reflex Sight will make its official debut at the 2016 SHOT Show in Las Vegas at Booth # 12571. The sight is available for sale on the CAA-USA website.

“We are already working on developing a sight for sharpshooters and another for handguns,” Mikey said. “I see it as my honor to get the best reflex sight into the true user’s hands allowing them to get home safely to their families.”