Liberty Ammunition’s lead-free .223 Rem 55 Grain rifle cartridge received a 4.68 out of 5 points for accuracy, lack of over penetration and running flawlessly with no malfunctions.

Bradenton, Fla. (December 2015) – (ArmsVault.com) – Liberty Ammunition is proud to announce the Silverado .223 Rem 55 grain cartridge was field-tested in the National Tactical Officers Association Member Tested and Recommended Program. The Silverado .223 Rem rifle cartridge received a score of 4.68 out of a possible 5 points. This lead-free 55 grain deep cavity hollow point was tested by NTOA members in various parts of North America and rated on a scale of zero to five in a variety of categories such as design, performance and quality. 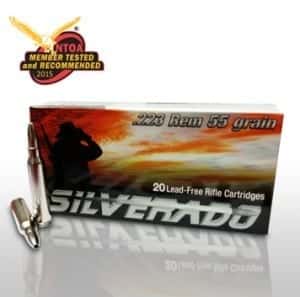 All of the testing officers were impressed with the performance of the Silverado .223 Rem 55 grain. The field-testers observed that the cartridges ran flawlessly in their firearms with no failure to feeds (FTF) or malfunctions. The testing officer from Florida “first fired off some rounds one at a time to make sure everything cycled and ejected properly. No failure to feed or fire issues arose and the ejection pattern seemed consistent. I then did some rapid fire on semi-auto to look for the same things. Again, I had no issues with FTF or fire. I then went to full auto and fired off some bursts, again looking for the usual problems, but there were no issues.” While the testing officer from Wisconsin expected that the extra length of the rounds might cause issues with the cycle of operation of his .223, “when I fired my .223, I did not have any issues with malfunctions/stoppages. The rounds performed flawlessly…. I plan to purchase more rounds and use them as my home defense round.”

The Silverado .223 Rem 55 grain cartridge also rated highly for its accuracy and its ability to limit over penetration while still producing exceptional stopping power. A testing officer from New Jersey decided to test the ammunition for penetration at distances of 50, 100 and 150 yards against both metal and wood backgrounds. He commented that “the round performed very well [during] the penetration test. There was limited over penetration on both of the targets. The point of aim and point of impact from all three distances were extremely true when fired from the Colt M-4 rifles utilized by the team in static positioned drills, as well as movement and shooting drills.” The Floridian testing officer remarked that the “hollow point is fairly unique to this caliber. Here the ammo is designed to expand and fragment like a typical hollow point. Overall, the ammo shot well and kept its accuracy, which I was happy with. I do like the hollow point aspect to it for limiting over penetration, which is very important, especially in the law enforcement application.”